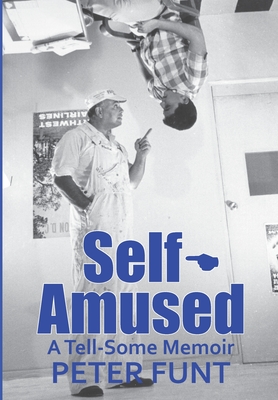 Based on a lifetime doing TV's original reality show, "Candid Camera," as well as experiences from an insane number of odd jobs, Self-Amused offers laughs, loves and "Candid Camera" secrets, with zero universality.

Peter Funt is surely the only person to ever be profiled in The New York Times while also writing for The Times, and at the same time selling copies of The Times on street corners. He was an award-winning journalist at ABC News, launched a national magazine that reached 1.5 million circulation-and also sold birthday cakes, dried flowers and restaurant placemats on which he printed news reports.

Against the advice of lawyers, Peter argued a case on Court TV. He foolishly hit Cybill Shepherd with a four-layer cake, and sat next to Clint Eastwood on a private jet as Clint cuddled a baby pig. He spent a day with Mickey Mantle and painted a billboard on a highway outside Denver. Peter's bookkeeper stole $250,000 and his house was twice burglarized. He's rescued three cats and one crow, kidnapped a baby deer, and battled raccoons. Dad Allen Funt once painted Peter white from head to toe and had him pose as a Roman statue in an art gallery. He also ordered Peter to hang from a 10-foot ceiling so people might think they were in an "upside-down room."

Peter says he's most proud of an award from a plumbing supply company, declaring the famous slogan "Smile, you're on Candid Camera" the most popular graffiti above restroom urinals.