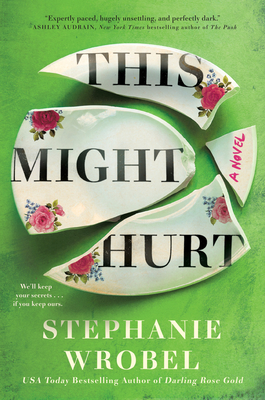 “You’ll be gripped in this clever exploration of fear and vulnerability right until the flawless ending—one you’ll most certainly want to talk about.”—ASHLEY AUDRAIN, New York Times bestselling author of The Push

From the USA Today bestselling and Edgar-nominated author of Darling Rose Gold comes a dark, thrilling novel about two sisters—one trapped in the clutches of a cult, the other in a web of her own lies.

Welcome to Wisewood. We’ll keep your secrets if you keep ours.

Natalie Collins hasn’t heard from her sister in more than half a year.

The last time they spoke, Kit was slogging from mundane workdays to obligatory happy hours to crying in the shower about their dead mother. She told Natalie she was sure there was something more out there.

And then she found Wisewood.

On a private island off the coast of Maine, Wisewood’s guests commit to six-month stays. During this time, they’re prohibited from contact with the rest of the world—no Internet, no phones, no exceptions. But the rules are for a good reason: to keep guests focused on achieving true fearlessness so they can become their Maximized Selves. Natalie thinks it’s a bad idea, but Kit has had enough of her sister’s cynicism and voluntarily disappears off the grid.

Six months later Natalie receives a menacing e-mail from a Wisewood account threatening to reveal the secret she’s been keeping from Kit. Panicked, Natalie hurries north to come clean to her sister and bring her home. But she’s about to learn that Wisewood won’t let either of them go without a fight.

Stephanie Wrobel is the international bestselling author of Darling Rose Gold. She grew up in Chicago but has been living in the UK for the past three years with her husband and dog, Moose Barkwinkle. She has an MFA from Emerson College and has had short fiction published in Bellevue Literary Review. Before turning to fiction, she worked as a creative copywriter at various advertising agencies.

“Wrobel once again proves to be a master at crafting thrillers.”—Shondaland

"With shades of Brit Bennett’s The Vanishing Half and Liane Moriarty’s Nine Perfect Strangers, This Might Hurt is a tense psychological thriller with an eye towards larger themes."—PureWow

“This Might Hurt is a mesmerizing and original ride! Expertly paced, hugely unsettling, and perfectly dark, you’ll be gripped in this clever exploration of fear and vulnerability right until the flawless ending—one you’ll most certainly want to talk about.”
—Ashley Audrain, New York Times bestselling author of The Push

“A gut wrenching, propulsive story about vulnerability and power. It was impossible to put down.”
—Tarryn Fisher, New York Times bestselling author of The Wives

“A sharp and intriguing look at reinvention and self-empowerment. This Might Hurt follows three women, each confronting her own set of fears, with revelations and consequences that are unexpected and chilling, right up to the jaw-dropping finale. Dark and twisted in all the right places, I did not want to stop reading this book.”
—Margarita Montimore, USA Today bestselling author of Oona Out of Order

"A genius, ripped-from-the-headlines masterpiece with a cult at its center. Inventive, disturbing, and tense, This Might Hurt hypnotizes the reader, until we realize, too late, what is truly happening. The very definition of suspense, this extraordinary novel will steal your breath away."
—Samantha M. Bailey, USA Today bestselling author of Woman on the Edge

"I don’t know if blood is thicker than water, but I know that my blood ran cold at several points reading this book. Filled with menace, this was a gripping and compulsive read from first page to last. I thought I’d never get off that island!"
—Liz Nugent, bestselling author of Little Cruelties

“An immersive novel about our capacity to both love and destroy, This Might Hurt is genuinely shocking, laced with dark humor, moments of surprising tenderness, and nightmare fodder galore. I read it in 24 hours, but will be thinking about it for much longer.”
—Laura Hankin, author of A Special Place for Women

"This Might Hurt has all the ingredients of a great mystery: a remote island, estranged sisters, some whopping secrets and a cult to boot. In the deft hands of sophomore author Stephanie Wrobel, these ingredients mix together to give us a novel that’s fun, creepy and incredibly fast-paced. Wrobel is such an observant and clever writer; It’s quite the trick to execute plot twists so perfectly that the reader at once doesn’t see them coming but then can’t believe they didn’t catch on. A ridiculously wry and absorbing thriller."
—Amy Stuart, bestselling author of Still Here

"Wrobel has honed her writing style even more sharply since her strong debut novel...and is again delivering her readers a "ripped from the headlines" story. This Might Hurt contains moments and characters recognizable to those familiar with the NXVIM cult and its downfall, although the twists and turns are all Wrobel's own, and will leave readers guessing until the very end."
—Booklist (starred review)

"It’s hard not to fall under the spell of Wisewood, or Wrobel’s mesmerizing, edge-of-your-seat storytelling. A deep dive into psychological abuse and manipulation and their long-lasting emotional and mental tolls; will certainly leave a mark."
—Library Journal (starred review)