Religion and the Rise of Capitalism (Paperback) 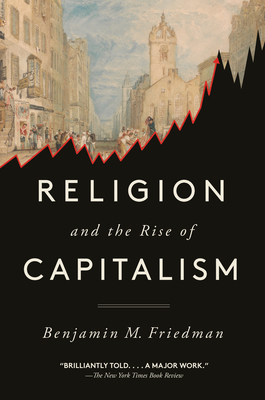 From one of the nation's preeminent experts on economic policy, a major reassessment of the foundations of modern economic thinking that explores the profound influence of an until-now unrecognized force—religion.

"Friedman has given us an original and brilliant new perspective on the terrifying divisions of our own times. No book could be more important.” —George A. Akerlof, Nobel Laureate in Economics

Critics of contemporary economics complain that belief in free markets—among economists as well as many ordinary citizens—is a form of religion. And, it turns out, that in a deeper, more historically grounded sense there is something to that idea.

Contrary to the conventional historical view of economics as an entirely secular product of the Enlightenment, Benjamin M. Friedman demonstrates that religion exerted a powerful influence from the outset. Friedman makes clear how the foundational transition in thinking about what we now call economics, beginning in the eighteenth century, was decisively shaped by the hotly contended lines of religious thought within the English-speaking Protestant world. Beliefs about God-given human character, about the after-life, and about the purpose of our existence, were all under scrutiny in the world in which Adam Smith and his contemporaries lived.

Friedman explores how those debates go far in explaining the puzzling behavior of so many of our fellow citizens whose views about economic policies—and whose voting behavior—seems sharply at odds with what would be to their own economic benefit. Illuminating the origins of the relationship between religious thinking and economic thinking, together with its ongoing consequences, Friedman provides invaluable insights into our current economic policy debates and demonstrates ways to shape more functional policies for all citizens.

BENJAMIN M. FRIEDMAN is the William Joseph Maier Professor of Political Economy, and formerly chairman of the Department of Economics, at Harvard University, where he has now taught for nearly half a century. Mr. Friedman's two previous general interest books are Day of Reckoning: The Consequences of American Economic Policy Under Reagan and After, and The Moral Consequences of Economic Growth. He has also written extensively on issues of economic policy, for both economists and economic policymakers, and he is a frequent contributor to national publications, especially The New York Review of Books. He lives in Cambridge, Massachusetts.

“Once theological questions are rendered into secular language, their relevance, and thus the importance of Friedman’s Religion and the Rise of Capitalism, becomes clear . . . This overview cannot even begin to pay homage to the prodigious research informing Friedman’s analysis. He covers not only the main thinkers in both economics and theology, but also the less-well-known ones who helped shape their thought. He can credibly discuss the philosophy of John Locke and the science of Isaac Newton. As one reads Friedman, words like “magisterial,” “masterpiece” and “magnificent” floated through my thoughts . . . If someone had told me that a former chairman of the Harvard economics department would write a major work on Calvinism and its influence, you would have had to consider me a skeptic. Nonetheless Friedman has, and the result is an awakening all its own.”—Alan Wolfe, The New York Times Book Review

“Friedman has made an important contribution to the literature on the intertwining of Western economic thought with religious beliefs. His detailed tracing of the philosophical and theological roots of free market economics is well researched, well written, and well worth reading.”—Carol Elsen, Library Journal (starred review)

“Of the many factors that went into the construction of the modern economic worldview undergirding capitalism, Friedman has successfully added religion back into the causal equation.”—Michael Shermer, The American Scholar

“Meticulously researched, extremely well-written . . . A joy to read . . . The amount of historical detail Friedman lays out in support of [his] thesis is breaktaking. Any reader, even one stepped in the history of the Enlightenment, Reformation, and nineteenth-century American religion, will come away learning much. . . . Friedman's book is a massive achivement.”—Jared Rubin, Journal of Economic Literature

“Ben Friedman’s Religion and the Rise of Capitalism is an expansive and intricate tapestry depicting the progression and interaction of ideas and events in economics and (mainly Protestant) religion across four centuries.  The richness of the woven strands does not obscure the thematic integrity of the book’s central argument.”—Bruce MacLaury, President Emeritus, The Brookings Institution

“Religion and the Rise of Capitalism takes longstanding debates over religion and capitalism in a surprising new direction. Benjamin Friedman makes his case with the erudition and particularity of a leading academic economist. His arguments are sure to generate new thinking and debate from all sides.”—Christopher DeMuth, Distinguished Fellow, Hudson Institute

“Ben Friedman's fascinating and impressive account of the interaction of economics and religion combines both mastery of the history of economic theory and a profound engagement with the complexities of religious belief, both in Britain and America. Economists, theologians, and students of modern intellectual history will find here a truly valuable resource.”—Harold W. Attridge, Sterling Professor of Divinity emeritus, Yale University

“Citizens are not simply pursuers of narrowly defined economic self-interest, sometimes to the point of seeming self-harm. Religion and the Rise of Capitalism makes sense of these choices with respect and insight, by showing the power of religious ideas to shape character, and in turn policy.”—Adam S. Posen, President, Peterson Institute for International Economics

“Benjamin Friedman has produced a worthy piece of intellectual history, with important implications for public policy. His book, to use an appropriate adjective, is enlightening.”—Robert Solow, Institute Professor Emeritus, MIT

“With his focus on the role of religion in the evolution of economic thinking, Benjamin Friedman has given us an original and brilliant new perspective on the terrifying divisions of our own times. No book could be more important.”—George A. Akerlof, Nobel Laureate in Economics

“In this pathbreaking study, Benjamin Friedman follows the continuing influence of theology on economics from Adam Smith into the twentieth century and even provides an analysis of why so many religious people in the U.S. today vote contrary to their own economic interests. A subtle and insightful book.”—Daniel Finn, Clemens Professor of Economics and Professor of Theology, College of St. Benedict and St. John’s University

"Economists and others curious about what sparked the classical economics of Smith and Schumpeter, later Keynes's paradigm and some of the new theories emerging now must read this colossal work. On top of that, the book puts to rest the belief that economists can't write."—Edmund Phelps, Nobel Laureate in Economics, author of Mass Flourishing

“In this massively researched and scholarly book, Friedman shows that religious thinking was present at the creation of the young science of economics, and that its influence on modern economic thought has been profound and lasting. Not only in academic circles, but also in present-day American political discourse, religion has been powerful both for good and for ill.  The author’s Moral Consequences of Economic Growth was a model of how to communicate complex factual material and sophisticated reasoning to the general reader. This new book does at least as good a job.”—A.M.C. Waterman, St John’s College, Winnipeg

"A lively, lucid story of self-interest mutating into something beneficial, a story crucial to the emergence of modern economics."—David D. Hall, author of The Puritans: A Transatlantic History