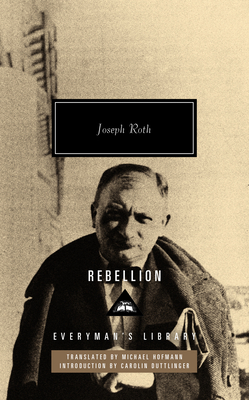 The only edition in print of the classic book at the center of Hugo Hamilton's highly anticipated novel, The Pages: Joseph Roth's 1924 tale of a one-legged street musician defying his fate in postwar Vienna.

Andreas Pum, having lost his leg in World War I, is rewarded with a medal and a permit to support himself by playing a barrel organ in the streets of Vienna. At first the simpleminded veteran is entirely satisfied with his lot, and he even finds a voluptuous widow to marry. But then a public quarrel with a respectable citizen on a tram propels Andreas’s life into a rapid downward trajectory. As he loses his beggar’s permit, his new wife, and even his freedom, he is provoked into finally rejecting his blind faith in the benevolence of the powers that govern his life. Joseph Roth’s remarkable novel deploys the haunting atmosphere and propulsive power of a dream to convey the bewilderment of an ordinary man as his world falls apart around him.

JOSEPH ROTH (1894-1939) was an Austrian novelist, essayist, journalist, and publisher. An outspoken critic of Hitler and militarism, he moved to Paris in 1933. Roth’s novels include What I Saw, The Legend of the Holy Drinker, Right and Left, The Emperor's Tomb, The String of Pearls, and The Radetzky March, an ironic portrait of the decline of the Austro-Hungarian Empire that is considered to be his masterpiece.

ABOUT THE TRANSLATOR: Michael Hofmann is a German-born poet who writes in English. He has translated the works of Brecht, Kafka, Fallada, and Roth, and teaches at the University of Florida in Gainesville.

ABOUT THE INTRODUCER:  Carolin Duttlinger is a professor of German at Oxford University, specializing in German literature, culture, and film. She is co-director of the Oxford Kafka Research Centre.

“Rebellion is reminiscent of Chekhov in its uncluttered, melancholy simplicity, while its sense of the larger, crushing incomprehensibility of things echoes . . . Kafka.” —The New York Times

"Roth's tale has that very European, straightforward, fairy-tale logic that makes everything both inevitable yet strangely nightmarish. You wouldn't be far wrong to think of Roth as occupying the fourth corner of a square whose other apices are Kafka, Musil, and Stefan Zweig." --The Guardian