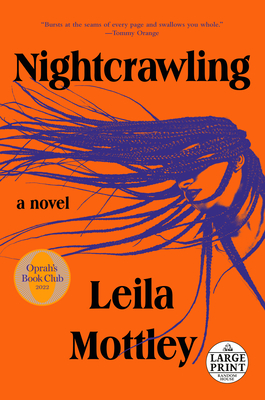 “Leila Mottley’s brilliant debut blazes a path through a dark world, illuminating the dangers that young women of color experience daily and just how close to the precipice many find themselves — even in the daylight. Unforgettable!”
— Aaron Cance, The Printed Garden, Sandy, UT

“Nightcrawling bursts at the seams of every page and swallows you whole.” —Tommy Orange, author of There There

Kiara and her brother, Marcus, are scraping by in an East Oakland apartment complex optimistically called the Regal-Hi. Both have dropped out of high school, their family fractured by death and prison

But while Marcus clings to his dream of rap stardom, Kiara hunts for work to pay their rent—which has more than doubled—and to keep the nine-year-old boy next door, abandoned by his mother, safe and fed. One night, what begins as a drunken misunderstanding with a stranger turns into the job Kiara never imagined wanting but now desperately needs: nightcrawling. Her world breaks open even further when her name surfaces in an investigation that exposes her as a key witness in a massive scandal within the Oakland Police Department.

Rich with raw beauty, electrifying intensity, and piercing vulnerability, Nightcrawling marks the stunning arrival of a voice unlike any we have heard before.

LEILA MOTTLEY is the author of the novel Nightcrawling, an Oprah’s Book Club Pick and New York Times best seller. She is also the 2018 Oakland Youth Poet Laureate. She was born and raised in Oakland, where she continues to live.

“A soul-searching portrait of survival and hope.” —Oprah Winfrey

“Nightcrawling really is a powerful, poignant story worth your attention . . . Revelatory . . . My god—that voice. It’s sometimes too painful to keep reading, but always too urgent to stop.” —Ron Charles, Washington Post

“Nightcrawling bursts at the seams of every page and swallows you whole.” —Tommy Orange, author of There There

“Unflinching . . . Essential to understanding how maddeningly elusive justice can be.” —San Francisco Chronicle

“Nightcrawling is a scorching, incredibly readable book . . . Get ready. Or don’t. It doesn’t matter. Leila Mottley is here.” —Kiese Laymon, author of Heavy

“Nightcrawling marks the dazzling arrival of a young writer with a voice and vision you won’t easily get out of your head . . . When asked how to write in a world dominated by a white culture, Toni Morrison once responded: ‘By trying to alter language, simply to free it up, not to repress or confine it . . . Tease it. Blast its racist straitjacket.’ At a time when structural imbalances of capital, heath, gender, and race deepen divides, the young American Leila Mottley’s debut novel is a searing testament to the liberated spirit and explosive ingenuity of such storytelling.” —The Guardian

“Mottley accesses the feelings one sometimes has while reading Dickens, the breathless sense that some massive unfairness is being inflicted on a good and innocent person . . . Kiara’s true outlet for hope is in the makeshift family of friends and relatives she manages to hold together. From such connections Mottley’s seemingly fatalistic book finds its buoyant humanity.” —Sam Sacks, Wall Street Journal

“Leila Mottley’s commanding debut, inspired by the life events of one woman’s struggle for body and soul against crushing exploitation, is fierce and devastating, rendered with electrifying urgency by this colossal young talent.” —Ayana Mathis, author of The Twelve Tribes of Hattie

“Fast money, crooked cops, and dire consequences are at the forefront of Mottley’s electric debut novel . . . A shocking page-turner.” —Elle

“With its powerful poetry and courageous, unsparing vision, Nightcrawling is more than just a magnificent debut novel. It is a bid, by this prodigiously gifted young writer, to heal a broken world.” —Ruth Ozeki, author of The Book of Form and Emptiness

“Leila Mottley has an extraordinary gift. She writes with the humility and sparkle of a child, but with the skill and deft touch of a wizened, seasoned storyteller.” —James McBride, author of Deacon King Kong

“So compelling that one cannot put it down . . . Through Kiara, Mottley gives voice to countless Black women and girls who remain invisible, vulnerable, and dehumanized by a system that deems them disposable . . . We need Kiara’s story, but more importantly, we need young writers like Leila Mottley . . . A testimony to hope, resilience, and love.” —Liber: A Feminist Review

“Leila Mottley has a poet’s delicate touch when she tells us the most brutal, heart-crushing truths. This is an electrifying debut.” —Dave Eggers, author of The Every

“A remarkable debut novel . . . Incendiary . . . The captivating, distinctively voiced Kiara is a young black American who can shoot hoops and skateboard, but her literary antecedents are Zola’s Thérèse Raquin, Victor Hugo’s Fantine, and Elizabeth Gaskell’s Ruth.” —The Sunday Times (U.K.)

“This is an accomplished first novel with a remarkable heroine whom the reader wills on every step of the way . . . Both a searing depiction of sexual exploitation and a gripping account of a struggle for survival . . . Hard-hitting but never heavy-handed.” —The Economist

“Feels vital in this cultural moment . . . Fires on all cylinders.” —Sydney Morning Herald

“A work of devastating social realism . . . executed with relentless momentum . . . A powerful discourse on the dehumanizing effects policing can have on marginalized communities, bodies, and minds (and especially on Black women).” —Library Journal (starred)

“Bold and beautiful . . . This heartrending story makes for a powerful testament to a Black woman’s resilience.” —Publishers Weekly (starred)

“Moved me to tears . . . Mottley is a master at describing scenes.” —iNews