Mutiny and the Mouse: Seymour in the Pacific (Paperback) 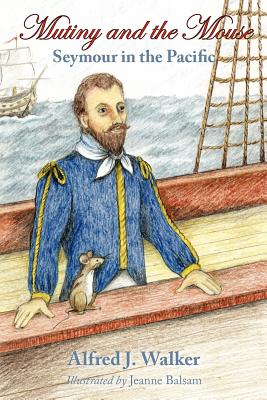 This is an sea story about Seymour, a mouse who finds himself on a British Navy sailing ship, the Revenge, under the command of Sir Francis Drake in the early 1590's, heading for the Pacific Ocean to fight the Spanish. He has never been on a ship before, much less a naval vessel, and he has quite a lot of adjusting to do, both with the crew and the mice that are aboard. As Seymour adjusts to life upon a naval vessel, he realizes that something amazing has happened: not only can he understand the other mice that live aboard, he can understand the Captain and his crew When the sailors discover this unique creature among them, they are determined to catch him, creating havoc on board. Hoping that he will be able to restore calm on the ship, Seymour presents himself to the Captain and offers his services. Drake is skeptical at first (might he be a spy for the French or Spanish?) but, after hearing Seymour speak, concludes that he might just have a valuable asset in the mouse. Unsure how he will use him, Drake immerses Seymour in all things nautical, and he is added to the crew. They soon encounter a Spanish galleon and during the battle, fog sets in and they find that their main lookout in the rigging gets killed in the fight. Suddenly Drake and the officers are without sight to steer the ship. Although afraid of heights, Seymour climbs up to the crows nest and directs the ship through the fog bank. They capture the Spanish ship and add it to their small fleet. Seymour is a hero. Drake proceeds north in the Pacific convinced there are other Spanish ships who are plundering the local citizens and stealing their gold and treasure. Weeks go by, and the trip proves long and hot, and provisions are running out. As a result, unrest breaks out among the crew and a sizable number stage a mutiny. Captain Drake and his officers are captured, some loyal men are killed, and the mutineers take control of the ship. Seymour is aware of the plight but is not sure how he can help. He and the other mice chew through a bulkhead and visit with Drake. They develop a plan where Seymour obtains a few weapons, frees the officers, and helps retake the ship. The mutineers are put over the side, or hung. After re-provisioning, they continue sailing north and find the Spanish ships they have been seeking. They notice that they have linked up with some pirate vessels and are safely in a harbor. Here Seymour once again uses his unique abilities, and turns the tide in favor of the British Navy, although he encounters fierce cats during a spy mission into enemy territory. The combination of a heroic mouse, fictional and factual history, and the excitement of sea battles will hopefully prove interesting to young readers as the story builds to an exciting climax.

Alfred Walker is a published author and he has sailed extensively in both the Caribbean and Nantucket Sound.