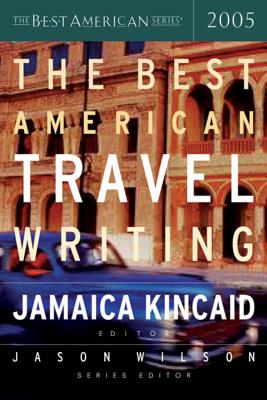 The Best American series has been the premier annual showcase for the country's finest short fiction and nonfiction since 1915. Each volume's series editor selects notable works from hundreds of periodicals. A special guest editor, a leading writer in the field, then chooses the very best twenty or so pieces to publish. This unique system has made the Best American series the most respected--and most popular--of its kind.

Jamaica Kincaid, guest editor, is the author of numerous award-winning works, including the memoirs My Brother and The Autobiography of My Mother and the novel Annie John. Her travelogue Among Flowers: A Walk in the Himalayas appeared in 2005. She lives in Vermont with her two children and a garden, in which she travels a great deal.

JASON WILSON, series editor, is the author of Godforsaken Grapes, Boozehound, and The Cider Revival. He is the creator of the newsletter and podcast Everyday Drinking. Wilson has been the series editor of The Best American Travel Writing since its inception in 2000. His work can be found at jasonwilson.com.

JAMAICA KINCAID is the author of numerous award-winning works, including the memoirs My Brother and The Autobiography of My Mother, the travelogue Among Flowers: A Walk in the Himalaya and the novels Annie John and My Favorite Tool. She is a contributor to The New Yorker and has also appeared in “The Sophisticated Traveler” in the New York Times.