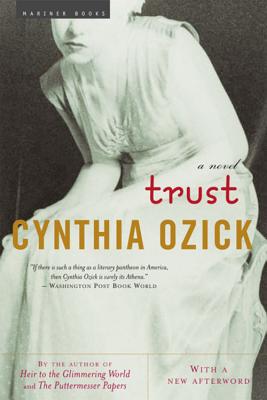 Money and conscience are at the heart of Cynthia Ozick's masterly first novel, narrated by a nameless young woman and set in the private world of wealthy New York, the dire landscape of postwar Europe, and the mythical groves of a Shakespearean isle. Beginning in the 1930s and extending through four decades, Trust is an epic tale of the narrator's quest for her elusive father, a scandalous figure whom she has never known. In a provocative afterword, Ozick reflects on how she came to write the novel and discusses the cultural shift in the nature of literary ambition in the years since.

Author of numerous acclaimed works of fiction and nonfiction, CYNTHIA OZICK is a recipient of the National Book Critics Circle Award and was a finalist for the Pulitzer Prize, the National Book Award, and the Man Booker International Prize. Her writing has appeared in The New Republic, Harper's, and elsewhere. She lives in New York.