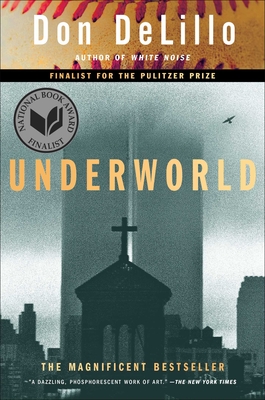 Don DeLillo's mesmerizing novel was a major bestseller when it was published in 1997 and was the most widely reviewed novel of the year. It opens with a legendary baseball game played between the Brooklyn Dodgers and the New York Giants in 1951. The home run that won the game was called the Shot Heard Round the World, and was shadowed by the terrifying news that on the same day, Russia tested its first hydrogen bomb. Underworld then tells the story of Klara Sax and Nick Shay, and of a half century of American life during the Cold War and beyond.

“This is a novel that draws together baseball, the Bomb, J. Edgar Hoover, waste disposal, drugs, gangs, Vietnam, fathers and sons, comic Lenny Bruce and the Cuban Missile Crisis. It also depicts passionate adultery, weapons testing, the care of aging mothers, the postwar Bronx, '60s civil rights demonstrations, advertising, graffiti artists at work, Catholic education, chess and murder. There's a viewing of a lost Eisenstein film, meditations on the Watts Tower, an evening at Truman Capote's Black & White Ball, a hot-air balloon ride, serial murders in Texas, a camping trip in the Southwest, a nun on the Internet, reflections on history, one hit (or possibly two) by the New York mob and an apparent miracle. As DeLillo says and proves, ‘Everything is connected in the end.’" —Michael Dirda, The Washington Post Book World

“Underworld is an amazing performance, a novel that encompasses some five decades of history, both the hard, bright world of public events and the more subterranean world of private emotions. It is the story of one man, one family, but it is also the story of what happened to America in the second half of the 20th century.” —The New York Times

“Astonishing…A benchmark of twentieth-century fiction, Underworld is stunningly beautiful in its generous humanity, locating the true power of history not in tyranny, collective political movements or history books, but inside each of us.” —Greg Burkman, The Seattle Times

“It’s hard to imagine a way people might better understand American life in the second half of the twentieth century and beginning of the twenty-first than by reading Don DeLillo. The scale of his inquiry is global and historic… His work is astounding, made of stealthy blessings… it proves to my generation of writers that fiction can still do anything it wants.” —Jennifer Egan, in her presentation of the Medal for Distinguished Contribution to American Letters

“Underworld is a page-turner and a masterwork, a sublime novel and a delight to read.” —Joan Mellen, The Baltimore Sun

Don DeLillo is the author of seventeen novels including White Noise, Libra, Underworld, Falling Man, and Zero K. He has won the National Book Award, the PEN/Faulkner Award for Fiction, the PEN/Saul Bellow Award, the Jerusalem Prize for his complete body of work, and the William Dean Howells Medal from the American Academy of Arts and Letters. His story collection The Angel Esmeralda was a finalist for the Story Prize and the PEN/Faulkner Award for Fiction. In 2013, DeLillo was awarded the Library of Congress Prize for American Fiction, and in 2015, the National Book Foundation awarded DeLillo its Medal for Distinguished Contribution to American Letters.

"His best novel and perhaps that most elusive of creatures, a great American novel... a masterpiece in which the depth and reach of the commonplace are invested with universal scope and grandeur. Underworld is also a thrilling page-turner." —David Wiegand, The San Francisco Chronicle Book Review

"The sheer size of the imaginative act and the beauty of its imagery are what is so impressive about this novel…. Underworld is a magnificent book by an American master." —Salman Rushdie

"Utterly extraordinary ... in its epic ambition and accomplishment, Underworld calls out for comparison with works that have defined the consciousness of their age." —Melvin Jules Bukiet, Chicago Tribune Books

"You pick up and travel with DeLill o anywhere—the bliss of a baseball game, the meeting of old lovers in a desert. He offers us another history of ourselves. He smells the music in argument and brag. He throws the unbitten coin of fame back at us. This book is an aria and a wolf-whistle of our half-century. It contains multitudes." —Michael Ondaatje

"DeLillo understands the capacity of words to elevate us above the mundane, to establish a distance from things and a mastery over them, a power emerging from the capacity given to Adam, the ability to name." —Steven E. Alford, Houston Chronicle

"Reading DeLillo's books bolsters our belief in the art of fiction: one bright shining sentence after another." —Paul Elie, Elle

"For those who love eloquent prose and powerful ideas, Underworld is an eight-course meal. .. . A n eye-opener, a consciousness-raising treatise on modern America by a writer in love with the power of words." —Dorman T. Shindler, The Denver Post

"Underworld soars. Bigger and richer than anything Do n DeLillo has done before, this multicharacter, time-leaping, sea-to-shining-sea dissection of American life is perilously good—so good, so strong, deep, knowing and funny." —Phil Hanrahan, Milwaukee Journal Sentinel

"Underworld, DeLillo's richest and most ambitious novel, seeks nothing less than the secret truths of modern America. " —Gary Lee Stonum, The Plain Dealer