The Museum: From its Origins to the 21st Century (Hardcover) 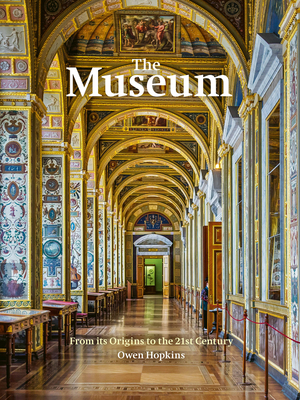 This beautiful and visually immersive book charts the fascinating story of the institution of the Museum, from its origins to the present.

Visited by millions
around the world every year, museums are one of mankind’s most essential creations. They tell stories, shape cultural identities and hold valuable insight about the past and about the future. This captivating works charts a path from the very first collection through to the latest developments in cultural curation, interweaving

Using examples of the greatest cultural institutions to shape the narrative, historian and academic Owen Hopkins draws on his deep knowledge of the field to outline the history of the museum movement.

Tracking the evolution from princely collections in Europe and the Enlightenment’s classically inspired temples of curiosities, via the public museums of the late nineteenth century, on to today’s global era oficonic buildings designed by the world’s leading architects, this book is a vital work for anyone seeking to understand the development of the museum into what it is today.

Over the course of five chapters filled with stunning imagery that highlights the beauty of these venerated buildings, the origins of key institutions are revealed, including:

By examining how these venues became intrinsic to our shared cultural experience, analysing the changing roles they play in society and questioning what the future holds in a digital age, this book is for anyone who has stood in awe at the spectacle of a museum.

Owen Hopkins is an architectural historian and Director of the Farrell Centre at Newcastle University. He was previously Senior Curator of Exhibitions and Education at Sir John Soane's Museum and before that Architecture Programme Curator at the Royal Academy of Arts, both in London. He has written six books, including Reading Architecture: A Visual Lexicon, and Lost Futures, an examination of the disappearing architecture of post-war Britain. He is also a regular commentator on architecture in newspapers, magazines, radio and television.