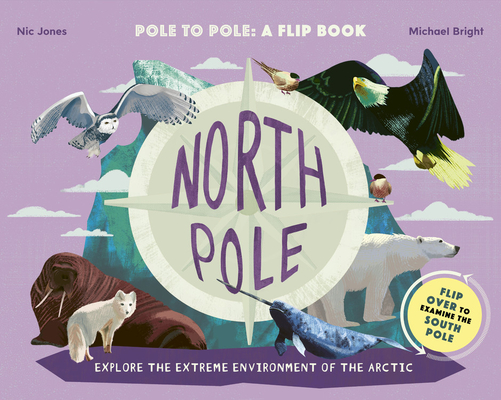 Fully-illustrated and with a fun and innovative flip-book format, the book provides the perfect way to explore and compare the extreme environments of the two Poles.

Take a trip to the ends of the earth and discover the extreme environments of the North and South Poles. Find out which animals live where, what the weather and climate is like and the effect global warming is having.

Beginning with the North Pole, the book introduces the geography and climate of the Arctic. Readers will discover how climate change is affecting sea ice and why multi-year ice is so important to walruses and polar bears. Find out what ice floes are and what lives under the ice. The many uses of the Arctic are explained, from the home it provides to whale hunters to the rocket and missile test sites it houses.

And then flip the book over and you arrive in the South Pole… The famous race to reach the pole in 1911 is retold and readers will discover why the orca is the ultimate polar predator. The huge tabular icebergs, sub-glacial lakes, and ice chimneys of the Antarctic are brought to life in all their impressive glory, not to mention the sea spiders, 'death star' starfish and other undersea giants!

Michael Bright is an executive producer with the BBC’s Natural History Unit. He and his colleagues are based in Bristol, England, but they scour the entire world for stories and images. He is the author of over 75 natural history books, including Andes to Amazon; the producer of countless television and radio programs, including the award-winning television series Natural World and Wildlife on One; and has been editorial consultant on several reference works.

Nic Jones graduated from the University of Bolton with a degree in Animation and Illustration. She often finds herself inspired by the intricacy and beauty of the natural world, and applies this to her illustration and design. Her illustrations are influenced by a passion for traditional drawing techniques, and they combine rich, vivid colors, with explorative, textured brushstrokes. Nic creates her bold illustrative work in Photoshop, and she has masterfully adapted her digital painting style to convey traditional illustration techniques, whilst maintaining the commercial advantages of working digitally.