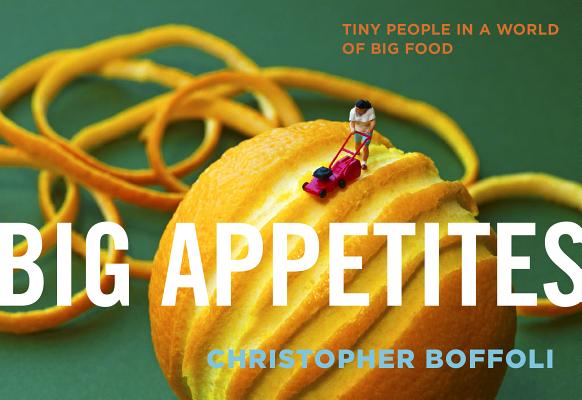 By Christopher Boffoli
Not Available
Out of Print

In Christopher Boffoli's book, you'll find typical people doing typical people things --just with big food. The photos are smart, funny, even philosophical at times. A fun gift book for foodies, artists, or anyone appreciative of the unusual.

— From Big Appetites: Tiny People in a World of Big Food

Welcome to a world where little people have big personalities. A world that’s upside down and yet weirdly, wonderfully real. A world where Lilliputian thieves poach strawberry seeds. Where it takes a guy with a jackhammer to pop open pistachios. Where skaters fall into a crack in the crème brûlée, and teddy bear cookies congregate with evil intent.

Marrying inspired photographs of real food and tiny people with equally inspired captions, photographer Christopher Boffoli creates a smart, funny, quirky vision of what it means to play with your food. The scenes are hilarious and outlandish— a farmer shovels a pasture full of cow pies, aka chocolate chips; hikers pause at a rest stop to take in a magical mushroom forest. And the captions surprise with their cleverness and emotional truth. Of the proudly gesticulating little chef amid the macarons: “Right on cue, Philippe stepped up to take all of the credit.” Of the tiny bather up to her chin in waves of blue Jell-O: “In her continuing search for a husband, Gladys decided it was best to put herself in situations where she needed to be rescued.” Of the broad-shouldered technician spreading condiments on a hot dog: “Gary always uses too much mustard. But no one can say so. It’s a union thing.”

Happiness, hope, adventure, pride, love, greed, menace, solitude—it’s our world, seen through a singularly unique and funny lens, in more than 100 scenes from breakfast through dessert.

Christopher Boffoli was nominated for a James Beard Award for his food photography, and his Big Appetites series has been featured in The Washington Post and on NPR, The Chew, the Huffington Post, Oprah.com, and other media outlets around the world. He also works as a writer and photojournalist and lives in Seattle, Washington.

"Christopher Boffoli won’t stop playing with his food, and we couldn’t be happier about it."
–Seattle Magazine