The City Tavern Cookbook: Recipes from the Birthplace of American Cuisine (Hardcover) 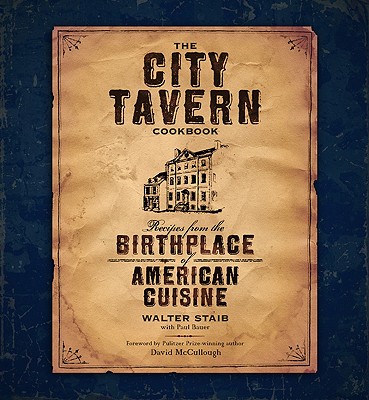 By Walter Staib
$35.00
It's Complicated--Contact Us for More Information

For history buffs who like to eat, there is no better gift or souvenir of the ultimate American landmark. The City Tavern restaurant was the social, political, and economic center of late 18th-century Philadelphia. Called the "most genteel" tavern in America by John Adams, it gained fame as the gathering place for members of the Continental Congresses and the Constitutional Convention, and for officials of the early Federal Government.

With more than 300 tempting, simple-to-make recipes and full-color photography, City Tavern will help home chefs and history buffs alike recreate the same dishes enjoyed by George Washington, John Adams, Thomas Jefferson, and Benjamin Franklin. Featuring traditional favorites:
This book's recipes are sure to entice adults and children alike, while simultaneously providing them with a wealth of fascinating American and culinary history!

More than just a cookbook, City Tavern is a treasury of American history.

Walter Staib is the chef and James Beard-nominated owner of the historic City Tavern restaurant in Philadelphia. Chef Staib has prior worked at such top European dining spots as Hotel Post, a historic five-star hotel in Germany's Black Forest region, and the Chessery in Switzerland, one of Europe's premier resorts. He is the host and chef behind the Emmy Award-winning PBS television series A Taste of History and has appeared on the Today show, 60 Minutes, Iron Chef, The Best Thing I Ever Ate, and others. He is the author of several books about American cooking and baking, and has a passion for historic American cuisine, for which he is determined to share with home cooks everywhere.