The Astonishing Life of Octavian Nothing, Traitor to the Nation, Volume I: The Pox Party (Hardcover) 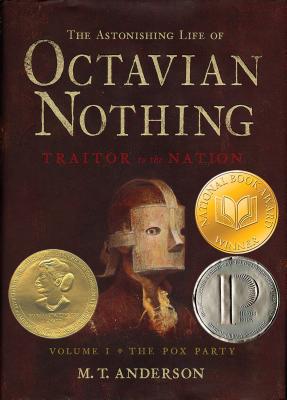 By M.T. Anderson
$17.99
It's Complicated--Contact Us for More Information

This is book number 1 in the Astonishing Life of Octavian Nothing series.

“This historical novel transports the reader to the early days of America's revolution. The future is open, everything is up in the air, and the hardest choice is one of loyalty: Should Octavian fight for the rebels who want to keep him a slave, or should he follow hope and side with the royalists who promise him personal freedom? Anderson's sequel to his award-winning The Astonishing Life of Octavian Nothing is a provocative story that continues to enlarge the young adult novel in thoughtful, glorious ways.”
— Mark David Bradshaw, Watermark Books, Wichita, KS

National Book Award Winner!
This deeply provocative novel reimagines the past as an eerie place that has startling resonance for readers today.


It sounds like a fairy tale. He is a boy dressed in silks and white wigs and given the finest of classical educations. Raised by a group of rational philosophers known only by numbers, the boy and his mother — a princess in exile from a faraway land — are the only persons in their household assigned names. As the boy's regal mother, Cassiopeia, entertains the house scholars with her beauty and wit, young Octavian begins to question the purpose behind his guardians' fanatical studies. Only after he dares to open a forbidden door does he learn the hideous nature of their experiments — and his own chilling role in them. Set against the disquiet of Revolutionary Boston, M. T. Anderson's extraordinary novel takes place at a time when American Patriots rioted and battled to win liberty while African slaves were entreated to risk their lives for a freedom they would never claim. The first of two parts, this deeply provocative novel reimagines the past as an eerie place that has startling resonance for readers today.

M. T. Anderson is the author of Feed, winner of the Los Angeles Times Book Prize, as well as The Astonishing Life of Octavian Nothing, Traitor to the Nation Volume I: The Pox Party, winner of the National Book Award and a New York Times bestseller, and its sequel, The Kingdom on the Waves, which was also a New York Times bestseller. Both volumes were also named Michael L. Printz Honor Books. M. T. Anderson lives in Cambridge, Massachusetts.

Anderson’s imaginative and highly intelligent exploration of the horrors of human experimentation and the ambiguous history of America’s origins will leave readers impatient for the promised sequel.
—New York Times Book Review

The story’s scope is immense, in both its technical challenges and underlying intellectual and moral questions. . . . Readers will marvel at Anderson’s ability to maintain this high-wire act of elegant, archaic language and shifting voices.
—Booklist (starred review)

Octavian's narration...quickly draws readers into its almost musical flow, and the relentless action and plot turns are powerful motivators.
—Bulletin of the Center for Children's Books (starred review)

A historical novel of prodigious scope, power and insight...This is the Revolutionary War seen at its intersection with slavery through a disturbingly original lens.
—Kirkus Reviews (starred review)

Anderson (Whales on Stilts) once again shows the breadth of his talents with this stunningly well-researched novel.
—Publishers Weekly

A brilliantly complex interrogation of our basic American assumptions. Anderson has created an alternative narrative of our national mythology, one that fascinates, appalls, condemns — and enthralls.
—Horn Book, The

Historically grounded, emotionally and philosophically complex, Octavian Nothing will compel readers to think differently about history and its echoes in the contemporary world.
—BookPage

A brilliant, passionate book that is flat-out unforgettable, a virtuoso exercise in voice that in no way distances the reader from the narrator and an experience of deeply felt empathy that his slowly emerging understanding of the nature of his existence engenders.
—Michael Cart, “Carte Blanche," Booklist

Gripping, thought-provoking and occasionally horrifying …this is first-class literature, a deserved winner of this year's National Book Award for young readers.
—Seattle Post-Intelligencer

Presents a unique vision of this nation's infancy, one to which young-adult readers with sophisticated tastes are likely to respond with enthusiasm.
—San Francisco Chronicle

The most daring and demanding of the fall books… Even more extraordinary is Anderson's powerful, nuanced revelation of the deep hypocrisies, the pernicious relationship between "rational" inquiry and cruelty; political expediency and the god of "reason"; ideas of democracy and true "Observation" of evidence.
—Toronto Star

A brilliant novel of war and race and the madness of slavery, Octavian has stayed with me for years.
—John Green