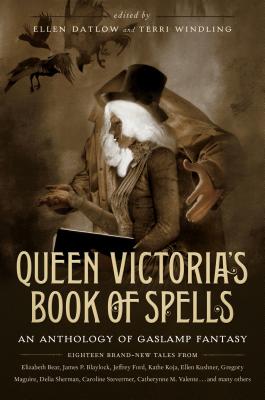 A Kirkus Reviews Best Fiction Book of the Year

An anthology featuring all-original tales of gaslamp fantasy from bestselling and award-winning authors including Gregory Maguire, author of Wicked.

"Gaslamp Fantasy," or historical fantasy set in a magical version of the nineteenth century, has long been popular with readers and writers alike. A number of wonderful fantasy novels owe their inspiration to works by nineteenth-century writers ranging from Jane Austen, the Brontës, and George Meredith to Charles Dickens, Anthony Trollope, and William Morris. And, of course, the entire steampunk genre and subculture owes more than a little to literature inspired by this period.

Queen Victoria's Book of Spells is an anthology for everyone who loves these works of neo-Victorian fiction, and wishes to explore the wide variety of ways that modern fantasists are using nineteenth-century settings, characters, and themes. These approaches stretch from steampunk fiction to the Austen-and-Trollope inspired works that some critics call Fantasy of Manners, all of which fit under the larger umbrella of Gaslamp Fantasy. The result is eighteen stories by experts from the fantasy, horror, mainstream, and young adult fields, including both bestselling writers and exciting new talents, who present a bewitching vision of a nineteenth century invested (or cursed!) with magic.

ELLEN DATLOW has been editing science fiction, fantasy, and horror short fiction for over thirty-five years as fiction editor of OMNI Magazine and editor of Event Horizon and SCIFICTION. In addition, she has edited more than a hundred science fiction, fantasy, and horror anthologies, including the annual The Best Horror of the Year series, The Doll Collection, Mad Hatters and March Hares, The Devil and the Deep, Echoes, Final Cuts, Body Shocks, and When Things Get Dark.

She lives in New York and co-hosts the monthly Fantastic Fiction Reading Series at KGB Bar.

Terri Windling is a writer, editor, artist, and passionate advocate of fantasy literature. She has won six World Fantasy awards for her editorial work and the Mythopoeic Award for her novel The Wood Wife. She has edited over thirty anthologies, many in collaboration with Ellen Datlow--including the Snow White, Blood Red adult fairy-tale series, The Armless Maiden, Sirens, The Green Man, and Swan Sister. She has also written children's books and articles on myth and folklore, and she edits the Endicott Studio Online Journal of Mythic Arts website. She divides her time between homes in Devon, England, and Tucson, Arizona.

“A superb sampling of urban fantasy.... You will have fun with all twenty stories.” —Booklist on Naked City

“This is a treasure chest. Open it and revel in its riches.” —Kirkus Reviews, starred review on The Faery Reel

“An often sophisticated view of the world [and] a real sense of how powerful nature can be in its various guises.” —School Library Journal on The Green Man