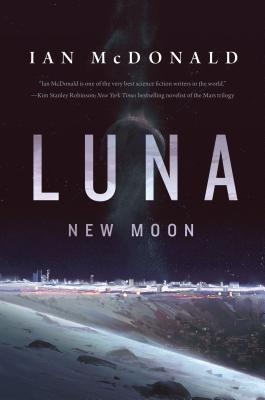 This is book number 1 in the Luna series.

Luna: New Moon is the perfect read for those killing time before the next Pierce Brown release. It's got family-dominated space societies, backstabbing, and a cast of morally complex characters. Am I describing Game of Thrones in space? Guess you better read to find out.

In Ian McDonald's Luna: New Moon, the scions of a falling house must navigate a world of corporate warfare to maintain their family's status in the Moon's vicious political atmosphere.

The Moon wants to kill you.

Maybe it will kill you when the per diem for your allotted food, water, and air runs out, just before you hit paydirt. Maybe it will kill you when you are trapped between the reigning corporations-the Five Dragons-in a foolish gamble against a futuristic feudal society. On the Moon, you must fight for every inch you want to gain. And that is just what Adriana Corta did.

As the leader of the Moon's newest "dragon," Adriana has wrested control of the Moon's Helium-3 industry from the Mackenzie Metal corporation and fought to earn her family's new status. Now, in the twilight of her life, Adriana finds her corporation-Corta Helio-confronted by the many enemies she made during her meteoric rise. If the Corta family is to survive, Adriana's five children must defend their mother's empire from her many enemies... and each other.

Ian McDonald was born in 1960 in Manchester, England, to an Irish mother and a Scottish father. He moved with his family to Northern Ireland in 1965. He has won the Locus Award, the British Science Fiction Association Award, and the John W. Campbell Memorial Award. His first novel, Desolation Road, was published in 1988. Other works include King of Morning, Queen of Day (winner of the Philip K. Dick Award), River of Gods, The Dervish House, the graphic novel Kling Klang Klatch, and many more. He now lives in Belfast.

“McDonald's never written a bad novel, but [Luna: New Moon] is a great one.” —Cory Doctorow

"With an action narrative driving this political commentary, Luna is actually a fantastically fun read as well as an important one. " —Los Angeles Review of Books

"An engaging thriller... McDonald's portrait of a cutthroat society trying to survive in the deadliest of environments also make it one of the strongest science fiction novels of the year." —The Chicago Tribune

"It’s a great scenario, lovingly detailed, and curiously attractive despite its current of unforgiving violence." —The Wall Street Journal

"The best moon novel I’ve seen in many years. . . McDon­ald’s novel has some formidable SF stingers not far beneath its densely textured surface." —Locus

"The story is innovative and fresh...has a feel of The Godfather meets A Song of Ice and Firemeets Ender’s Game." —Portland Book Review

"Spare, simple, elegant when he needs to be...deep and meaty when he wants to be...[Mcdonald] does his work like an artisan pulling a sculpture from stone. " —NPR

"Each of McDonald’s viewpoint characters is made human in fascinating and occasionally disturbing detail, and the solar system of the 22nd century is wonderfully delineated." —Publishers Weekly, starred review

"The fights and vengeance that follow are more vicious and intricate than anything in Game of Thrones, full of great acts of self-sacrifice and viciousness alike, brave cavalry charges and last stands, cowardice and avarice." —Boing Boing

"For all the enjoyable intrigue he concocts, McDonald never lets us forget that the Moon is a frontier that basically just wants to kill us." —Chicago Tribune