Empress of Forever: A Novel (Paperback) 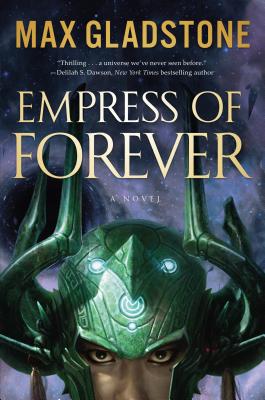 This has all the space pirates and all-powerful tyrannical empires you could want, with added nuance and social commentary. This book shifts from corporate thriller to space opera with exceptional grace, and gives us the brilliant, analytical, difficult to impress Vivian Liao as our guide. Plus, it's just a ton of fun.

— From Empress of Forever

A wildly successful innovator to rival Steve Jobs or Elon Musk, Vivian Liao is prone to radical thinking, quick decision-making, and reckless action. On the eve of her greatest achievement, she tries to outrun people who are trying to steal her success.

In the chilly darkness of a Boston server farm, Viv sets her ultimate plan into motion. A terrifying instant later, Vivian Liao is catapulted through space and time to a far future where she confronts a destiny stranger and more deadly than she could ever imagine.

The end of time is ruled by an ancient, powerful Empress who blesses or blasts entire planets with a single thought. Rebellion is literally impossible to consider--until Vivian Liao arrives. Trapped between the Pride—a ravening horde of sentient machines—and a fanatical sect of warrior monks who call themselves the Mirrorfaith, Viv must rally a strange group of allies to confront the Empress and find a way back to the world and life she left behind.

A magnificent work of vivid imagination and universe-spanning action, Empress of Forever is a feminist Guardians of the Galaxy crossed with Star Wars and spiced with the sensibility and spirit of Iain M. Banks and William Gibson.

“Empress of Forever is tense and vast, complex and twisty, a space opera epic that’s a lot faster on the draw than Star Wars or Star Trek ever dreamed of being. But at its core, it’s an epic about the value of empathy and the importance of compassion. It’s amazingly good.”—Locus


“With Empress of Forever, Max Gladstone’s remarkable talent is operating at full stretch, demonstrating the strength, power, and originality at his command. This unique and propulsive novel yields a deep, cellular-level enchantment filled at every turn with curiosity and delight.”—Peter Straub


“Empress of Forever is a story that will make you weep with wonder. The whole book is filled with the kind of snark that I love and an endless majesty of stars. It broke me to pieces and then stitched me back together with golden thread. Simply glorious.”—K.B. Wagers, author of Behind the Throne

“Galaxy-saving space opera with cool original settings and a unique band of adventurers that change each other for the better. It was a wild ride and I really enjoyed it.”—Martha Wells, Hugo Award-winning author of The Murderbot Diaries


“Incorporates wonder and wit to create a feminist, humanist playground. Introduces one mind-blowing concept after another, capitalizing on the concept of personal power while candidly addressing personal failure. This feast for the imagination intelligently captures the complexities of a variety of relationships in an adrenaline-fueled series of escapades and will leave readers both exhausted and elated.”—Publishers Weekly, starred review

“A fantastic tale of adventure on the grandest scale of epic space opera, spanning galaxies full of battles and traps as well as trade and negotiation, all told with humor as the crew seeks allies, weapons, and ships to fight back against The Empress to save the galaxy—and so Viv can find her way home.”—Booklist, starred review

“Vivian is an amazing woman: with no more than her sharp wit in a universe of AIs and enhanced beings, she still ends up being the key to the truth. Gladstone's epic space opera and fast-paced adventure will thrill readers.”—Library Journal, starred review

MAX GLADSTONE is a fencer, a fiddler, and the winner of the Hugo and Nebula Awards for This is How You Lose the Time War, co-written with Amal El-Mohtar. A two-time finalist for the John W. Campbell Award, he is fluent in Mandarin and has taught English in China. He is also the author of the Craft Sequence of novels--a Hugo Award finalist, a game developer, and the showrunner for the fiction serial, Bookburners. Max lives and writes in Somerville, Massachusetts.

"This feast for the imagination intelligently captures the complexities of a variety of relationships in an adrenaline-fueled series of escapades and will leave readers both exhausted and elated." —Publishers Weekly, starred review

“Empress of Forever [demonstrates] the strength, power, and originality at his command. A deep, cellular-level enchantment filled at every turn with curiosity and delight.” —Peter Straub, New York Times bestselling author

"Readers will be hooked from page one. Vivan Liao is the best kind of badass. Zanj is an epic trainwreck of death and destruction. The rest of the crew is too awesome for words. The whole book is filled with the kind of snark that I love and an endless majesty of stars. It broke me to pieces and then stitched me back together with golden thread. Simply glorious.” — K.B. Wagers, author of Behind the Throne

“This is galaxy-saving space opera with cool original settings and a unique band of adventurers that change each other for the better. It was a wild ride and I really enjoyed it.”—Martha Wells, Nebula Award-winning author of The Murderbot Diaries

“Max Gladstone has recklessly folded space and time in order to project a galaxy sized adventure into this book-sized container. Take care when you open it.” —Howard Tayler, Hugo Award-winning creator of Schlock Mercenary

“Places Gladstone firmly in the lineage of William Gibson and Neal Stephenson, and yet stands apart as something incredibly special.” —Fran Wilde, Andre Norton Award-winning author

“Empress of Forever is a spaceship. It blasts through a vast sparkling cosmos, powered by myth and Gladstone’s boundless imagination, crewed by characters you can’t help but love.” —Hannu Rajaniemi, author of The Quantum Thief

“A gloriously maximal space opera in the tradition of Banks and Rajaniemi—the diamond-bright adventure of five unlikely companions across a transhuman galaxy.” — Seth Dickinson, author of The Traitor Baru Cormorant