The Ruin of Angels: A Novel of the Craft Sequence (Paperback) 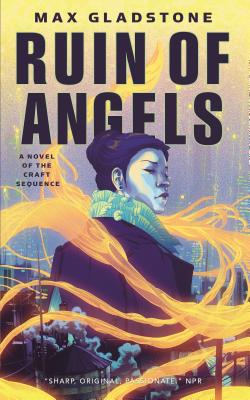 This is book number 6 in the Craft Sequence series.

Max Gladstone returns with The Ruin of Angels, the sixth novel in the Hugo-nominated Craft Sequence, which The Washington Post calls "the best kind of urban fantasy" and NPR calls "sharp, original, and passionate"

The God Wars destroyed the city of Alikand. Now, a century and a half and a great many construction contracts later, Agdel Lex rises in its place. Dead deities litter the surrounding desert, streets shift when people aren’t looking, a squidlike tower dominates the skyline, and the foreign Iskari Rectification Authority keeps strict order in this once-independent city—while treasure seekers, criminals, combat librarians, nightmare artists, angels, demons, dispossessed knights, grad students, and other fools gather in its ever-changing alleys, hungry for the next big score.

Priestess/investment banker Kai Pohala (last seen in Full Fathom Five) hits town to corner Agdel Lex’s burgeoning nightmare startup scene, and to visit her estranged sister Lei. But Kai finds Lei desperate at the center of a shadowy, and rapidly unravelling, business deal. When Lei ends up on the run, wanted for a crime she most definitely committed, Kai races to track her sister down before the Authority finds her first. But Lei has her own plans, involving her ex-girlfriend, a daring heist into the god-haunted desert, and, perhaps, freedom for an occupied city. Because Alikand might not be completely dead—and some people want to finish the job.

Hugo, Nebula, and Locus Award–winning author of the Craft Sequence of fantasy novels, MAX GLADSTONE has been thrown from a horse in Mongolia and once wrecked a bicycle in Angkor Wat. He is the author of many books, including Last Exit, Empress of Forever, and, with Amal El-Mohtar, the internationally bestselling This Is How You Lose the Time War. His dreams are much nicer than you’d expect.

"Gladstone packs a lot into his tale (including a brilliant sequence in which Kai encounters another trans person who lacked Kai’s access to divine resources), and longtime readers may find some of his choices surprising." —Publishers Weekly Starred Review, on Ruin of Angels

“This is the best kind of urban fantasy, filled with diverse characters and thought-provoking philosophies.” —The Washington Post, on Full Fathom Five

“If you’ve been looking for a different kind of fantasy—part urban, part epic, maybe something in between...you’ll thoroughly enjoy this novel.” —Carrie Vaughn, author of The Kitty Norville series, on Two Serpents Rise

“Suspenseful and fast-paced throughout, and the diverse, female-led cast is a joy to follow through the fascinating and unusual landscape.” —Publishers Weekly Starred Review, on Three Parts Dead