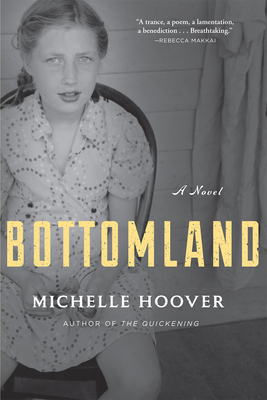 “In the years following World War I, the Hess family settles on Iowa farmland hoping to escape anti-German sentiment. Two of their girls disappear as the U.S. marches towards World War II, and relationships both within and outside of the family suffer. Based loosely on an unearthed family secret, Hoover has written an atmospheric novel evocative of both a time and place.”
— Kris Kleindienst (W), Left Bank Books, Saint Louis, MO

At once intimate and sweeping, Bottomland follows the Hess family in the years after World War I, as they attempt to rid themselves of the Anti-German sentiment that left a stain on their name. But when the youngest two daughters vanish in the middle of the night, the family must piece together what happened while struggling to maintain their life on the unforgiving Iowa plains. In the weeks after Esther and Myrle's disappearance, their siblings desperately search for them, through the stark farmlands to unfamiliar world of far-off Chicago. Have the girls run away to another farm? Have they gone to the city to seek a new life? Or were they abducted? Ostracized and misunderstood in their small town in the wake of the war, the Hesses fear the worst. Bottomland is a haunting story of pride, love, and betrayal, set among the rugged terrain of Iowa, the fields of war-torn Flanders, and the bustling Chicago streets. With exquisite lyricism, Michelle Hoover deftly examines the intrepid ways a person can forge a life of one's own despite the dangerous obstacles of prejudice and oppression.

Michelle Hoover is the Fannie Hurst Writer-in-Residence at Brandeis University and teaches at GrubStreet, where she leads the Novel Incubator program. She is a 2014 NEA Fellow and has been a Writer-in-Residence at Bucknell University, a MacDowell Fellow, and a winner of the PEN/New England Discovery Award. Her debut, The Quickening, was a 2010 Massachusetts Book Award Must Read." She is a native of Iowa and lives in Boston.