How to Weep in Public: Feeble Offerings on Depression from One Who Knows (Paperback) 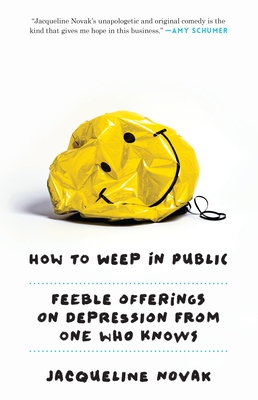 With this laugh-out-loud, poignant-ish part-memoir filled with helpful lists like “Top Eight Ways to Avoid Charming Your Therapist,” Novak bravely gives fellow “depressos” permission to lean in to what they feel, and learn things along the way, maybe.

— From How to Weep in Public

In her darkly funny memoir and guide to the depressed life, comedian Jacqueline Novak doesn’t offer help overcoming depression—just much-needed comfort, company, and tips for life inside the fog.

“Jacqueline Novak’s unapologetic and original comedy is the kind that gives me hope in this business.”—Amy Schumer

With advice that ranges from practical (Chapter 17: Do Your Crying on a Cat) to philosophical (Chapter 21: Make Peace With Sunshine), this laugh-out-loud memoir traces the depression thread from Novak's average suburban childhood to her current adult New York City existence, an imperfect but healthy-ish life in which Novak is mostly upright but still rarely does laundry.

At heart, How to Weep in Public provides a no-pressure, safe-zone for the reader to curl up inside. Keep this book on the shelf to be returned to it as needed–after all, depression is recurring. Jacqueline will be waiting to you tell you “You can fight another day.” No, not as in “fight on another day” but  “fight this some other day.”

Whether you’re coping with the occasional down day, or thriving fully in Picasso’s blue period, How to Weep in Public is the perfect place to regroup during a dark stint. So sit back, relax, and let Jacqueline Novak show you how to navigate the shadowy corridors of your troubled mind or the cheese display at the supermarket when food is the only thing that can save you.

JACQUELINE NOVAK is a stand-up comic who has been featured on The Late Late Show with James Corden, at comedy festivals across the country, and was named a New Wave Woman by Pandora. Novak’s comedy album, Quality Notions, is available on iTunes. Novak lives in New York, NY.

“[How to Weep in Public] adds levity to the daunting topic of depression. For anyone feeling down in the dumps, a dose of Novak will help mitigate the pain.”—Publishers Weekly

“Best read in short spurts with a stiff drink in hand, this book is an amusing look at depression that could inspire a depressed person to rejoin society.”—Kirkus Reviews

"In her literary debut How to Weep in Public, Jacqueline Novak explores guilt and anxiety through humor and honesty.”—Interview Magazine

"[How to Weep in Public] will have you laughing through the tears.”—Newsweek

“A comedian who I foresee will be one of the next great stars in comedy.”—Mike Birbiglia, author of Sleepwalk With Me

“I have known Jacqueline Novak for many years and no one is able to synthesize the Venn diagram of depression and hilariousness quite like her. She has an agile mind that, when not dominated by crushing effects of depression, can produce very funny and unique writing.”—Nick Kroll, star of Comedy Central’s Kroll Show

“Jacqueline Novak is one the funniest comedians I’ve shared a stage with, and also one of the most depressed. Thank goodness she’s finally combined the two! Only Jacqueline could make melancholy so hilarious.”—Adam Conover, comedian, creator & host of TruTV’s Adam Ruins Everything

“Jacqueline’s mind works in comedic ways that make me jealous of the dysfunction and pain she must have encountered in order to be so god damned funny.”—Nikki Glaser, host of Comedy Central's Not Safe

“As a fellow comedian and clinically depressed person, I am thrilled that Jacqueline Novak is finally stepping up to the plate to shed further darkness on a subject I am all-too familiar with. Jacqueline is an absolute delight- endlessly hilarious, charming, and, perhaps most importantly, one of the most depressed people I have ever known. I can’t wait to push aside the saltine crumbs, old newspapers, and empty Mountain Dew bottles and drag her book into bed with me.”—Comedian Dave Hill, author of Tasteful Nudes and host of WFMU's Goddamn Dave Hill Show

“Jacqueline Novak is one of the funniest and most original young comic voices in New York. She's also really depressed but not in a depressing way. She's like a hipster, female Woody Allen."—Michael Showalter, comedian and author of Mr. Funny Pants

“Jacqueline Novak's thoughts on depression are hilarious, smart, and enormously practical. As someone who has been through depression time and time again, I can tell you that Jacqueline's insights are not just funny -- they're incredibly relatable. I can't think of a better candidate to write the great anti-self-help book of our time." —Sara Benincasa, author of Agorafabulous!: Dispatches From My Bedroom

"One of my favorite comedians, Jacqueline bravely and hilariously shines light into the darker corners of modern existence, and if that's not the point of comedy, I don't know what is."—Pete Holmes, host of the You Made It Weird podcast