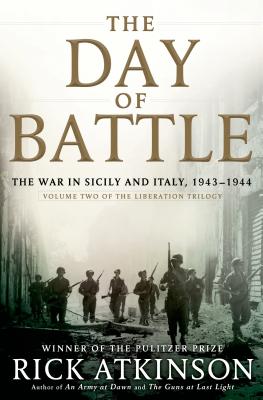 This is book number 2 in the The Liberation Trilogy series.

In the second volume of his epic trilogy about the liberation of Europe in World War II, Pulitzer Prize winner Rick Atkinson tells the harrowing story of the campaigns in Sicily and Italy

In An Army at Dawn—winner of the Pulitzer Prize—Rick Atkinson provided a dramatic and authoritative history of the Allied triumph in North Africa. Now, in The Day of Battle, he follows the strengthening American and British armies as they invade Sicily in July 1943 and then, mile by bloody mile, fight their way north toward Rome.

The Italian campaign's outcome was never certain; in fact, Roosevelt, Churchill, and their military advisers engaged in heated debate about whether an invasion of the so-called soft underbelly of Europe was even a good idea. But once under way, the commitment to liberate Italy from the Nazis never wavered, despite the agonizingly high price. The battles at Salerno, Anzio, and Monte Cassino were particularly difficult and lethal, yet as the months passed, the Allied forces continued to drive the Germans up the Italian peninsula. Led by Lieutenant General Mark Clark, one of the war's most complex and controversial commanders, American officers and soldiers became increasingly determined and proficient. And with the liberation of Rome in June 1944, ultimate victory at last began to seem inevitable.

Drawing on a wide array of primary source material, written with great drama and flair, this is narrative history of the first rank. With The Day of Battle, Atkinson has once again given us the definitive account of one of history's most compelling military campaigns.

Rick Atkinson is the bestselling author of the Liberation Trilogy—An Army at Dawn (winner of the Pulitzer Prize for History), The Day of Battle, and The Guns at Last Light—as well as The Long Gray Line and other books. His many additional awards include a Pulitzer Prize in journalism, a George Polk Award, and the Pritzker Military Library Literature Award. A former staff writer and senior editor at The Washington Post, he lives in Washington, D.C.

“Majestic... Atkinson's achievement is to marry prodigious research with a superbly organized narrative and then to overlay the whole with writing as powerful and elegant as any great narrative of war.” —The Wall Street Journal

“A triumph of narrative history, elegantly written, thick with unforgettable description and rooted in the sights and sounds of battle.” —The New York Times

“In The Day of Battle, Rick Atkinson picks up where he left off in An Army at Dawn, his history of the North African campaign, which won the Pulitzer Prize in 2003. A planned third volume, on the Normandy invasion and the war in Europe, will complete The Liberation Trilogy, which is shaping up as a triumph of narrative history, elegantly written, thick with unforgettable description and rooted in the sights and sounds of battle . . . He excels at describing the furor of battle, and the Italian campaign provides him with abundant raw material. . . Mr. Atkinson, a longtime correspondent and editor for The Washington Post, conveys all of this with sharp-edged immediacy and a keen eye for the monstrous and the absurd.” —William Grimes, The New York Times

“Monumental ... With this book, Rick Atkinson cements his place among America's great popular historians, in the tradition of Bruce Catton and Stephen Ambrose.” —The Washington Post

“A very fine book .... Anyone who devoured An Army at Dawn with relish will be delighted with Atkinson's account of the Sicilian and Italian campaign.

“[A] fascinating account of the war in Sicily and Italy.

“Splendid ... the infantrymen who did the fighting will grab at readers' hearts.

“With The Day of Battle, Atkinson again proves himself to stand among the ranks of our most talented popular historians ... Required reading for anyone with an interest in the battles of World War II.

“A seamless, stunning narrative that is the equal of An Army at Dawn .... Atkinson's success lies in his ability to render bare war's wretched realities in astounding prose.