The Musical Brain: And Other Stories (Hardcover) 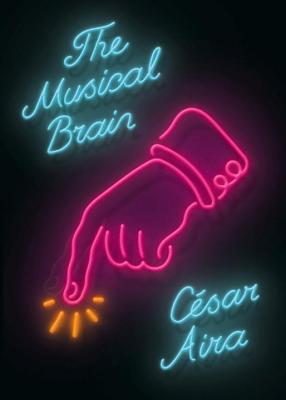 A beautifully strange and packed short story collection. You get caught up with Aira in his preposterous logic problems and descriptions of artwork—such as a historical scene on a ship deck depicted in a folded cafe napkin, a dissolving Mona Lisa that becomes Debussyscented candles. Aira poses important questions, like: Would you rather have a Picasso or be a Picasso? For lovers of Borges, Cortazar, Calvino, Murakami.

— From The Musical Brain: And Other Stories

A delirious collection of short stories from the Latin American master of micro-fiction.

A delirious collection of short stories from the Latin American master of microfiction, César Aira–the author of at least eighty novels, most of them barely one hundred pages long–The Musical Brain & Other Stories comprises twenty tales about oddballs, freaks, and loonies. Aira, with his fuga hacia adelante or "flight forward" into the unknown, gives us imponderables to ponder and bizarre and seemingly out-of-context plot lines, as well as thoughtful and passionate takes on everyday reality. The title story, first published in the New Yorker, is the creme de la creme of this exhilarating collection.

CÉSAR AIRA was born in Coronel Pringles, Argentina in 1949, and has lived in Buenos Aires since 1967. He taught at the University of Buenos Aires (about Copi and Rimbaud) and at the University of Rosario (Constructivism and Mallarmé), and has translated and edited books from France, England, Italy, Brazil, Spain, Mexico, and Venezuela. Perhaps one of the most prolific writers in Argentina, and certainly one of the most talked about in Latin America, Aira has published more than 100 books to date in Argentina, Mexico, Colombia, Venezuela, Chile, and Spain, which have been translated for France, Great Britain, Italy, Brazil, Portugal, Greece, Austria, Romania, Russia, and the United States. One novel, La prueba, has been made into a feature film, and How I Became a Nun was chosen as one of Argentina’s ten best books. Besides essays and novels Aira writes regularly for the Spanish newspaper El País. In addition to winning the 2021 Formentor Prize, he has received a Guggenheim scholarship, and was shortlisted for the Rómulo Gallegos prize and the Booker International Prize.

Chris Andrews was born in Newcastle, Australia, in 1962. He studied at the University of Melbourne and taught there, in the French program, from 1995 to 2008. He also taught at the University of Western Sydney, where he was a member of the Writing and Society Research Center. As well as translating nine books by Roberto Bolano and ten books (and counting) by César Aira, he also brought the French author Kaouther Adimi’s Our Riches into English for New Directions. Andrews has won the Valle-Inclán Prize and the French-American Foundation Translation Prize for his translations. Additionally, he has published the critical studies Poetry and Cosmogony: Science in the Writing of Queneau and Ponge and Roberto Bolano's Fiction: An Expanding Universe as well as two collections of poems, Cut Lunch and Lime Green Chair, for which he won the Anthony Hecht Poetry Prize.

Once you start reading Aira, you don't want to stop.
— Roberto Bolaño

Aira’s cubist eye sees from every ­angle. The stories in “The Musical Brain” exhibit the continuing narration of Aira’s improvisational mind. His characters — whether comic-strip ruffians, apes, subatomic particles or a version of his boyhood self — enter a shifting and tilting landscape of events that unhinge our temporal existence and render it phantasmagorical yet seemingly everyday in the unfolding. His matter-of-fact approach, accepting even the most outlandish episodes, suspends disbelief and encourages one’s own sense of displacement, of being released from the commonplace. Hail César!
— Patti Smith - The New York Times Book Review

Everything in Aira has that Mad Scientist feel to it.
— The Millions

Exhilarating. César Aira is the Duchamp of Latin American literature. Aira is one of the most provocative and idiosyncratic novelists working in spanish today and should not be missed.
— Natasha Wimmer - The New York Times

Aira oversteps the bounds of realism, forcing the world to live up to his imagination.
— Benjamin Lytal - The New York Sun

Surreal, witty, and funny.
— The Guardian

The first collection of Aira's stories might be his masterpiece.
— Publishers Weekly, (starred review)

Aira is firmly in the tradition of Jorge Luis Borges and W. G. Sebald, those great late modernists for whom fiction was a theater of ideas.
— Mark Doty - Los Angeles Times

Aira seems fascinated by the idea of storytelling as invention, invention as improvisation, and improvisation as transgression, as getting away with something.
— The New York Review of Books

Aira conjures a languorous, surreal atmosphere of baking heat and quietly menacing shadows that puts one in mind of a painting by de Chirico.
— The New Yorker

Argentine author César Aira is an exquisite miniaturist who toys with avant-garde techniques. His work has drawn comparisons to Vladimir Nabokov and Italo Calvino for its gleeful literary gamesmanship and stories-within-stories.
— The Wall Street Journal

His novels are eccentric clones of reality, where the lights are brighter, the picture is sharper, and everything happens at the speed of thought.
— Jacob Mikanowski - The Millions

What a gift: to look forward to reading a new Aira novel from New Directions every year for the rest of one's life.
— Thomas McGonigle - Los Angeles Times

One of
the most celebrated authors in Latin America.
— New York Observer

Outlandish B-movie fantasies are all part of the game. His best-known works are nonsensically hysterical. To love César Aira you must have a taste for the absurd, a tolerance for the obscurely philosophical, and a willingness to laugh out loud against your better judgment.
— Marcela Valdes - NPR Books

A distinctive hallucinatory style, which blends together reality and fiction, the waking world and the dream world
— Chloe Schama - The New Republic

César Aira is wild. The laws of gravity do not apply.
— James S. A. Correy - The Denver Post

Aira's works are like slim cabinets of wonder, full of unlikely juxtapositions. His unpredictability is masterful.
— Rivka Galchen - Harper's

César Aira's novels are the narrative equivalent of the Exquisite Corpse, that surrealist parlor game in which players add to drawings or stories without knowledge of previous or subsequent additions. Wildly heterogeneous elements are thrown together, and the final result never fails to surprise and amuse. Aira is wacky enough to play the game by himself, but the reader isn't left out either.
— The Millions

A lampoon of our need for narrative. No one today does megafiction like Aira.
— Robyn Creswell - Paris Review