Fireflies, Glow-Worms, and Lightning Bugs: Identification and Natural History of the Fireflies of the Eastern and Central United States and Canada (Paperback) 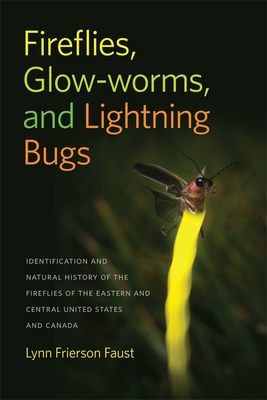 Fireflies, Glow-worms, and Lightning Bugs is the first-ever comprehensive firefly guide for eastern and central North America. It is written for all those who want to know more about the amazing world of lightning bugs and learn the secrets hidden in the flash patterns of the 75+ species found in the eastern and central United States and Canada. As an independent researcher working with numerous university teams, naturalist Lynn Frierson Faust, "The Lightning Bug Lady," has spent decades tracking the behavior and researching the habitats of these fascinating creatures.

Based on her twenty-five years of fieldwork, this book is intended to increase understanding and appreciation of bioluminescent insects while igniting enthusiasm in a fun and informative way. Species accounts are coupled with historical backgrounds and literary epigraphs to engage and draw readers young and old into the world of these tiny sparklers. A chart documenting the flash patterns of the various species will aid in identification. Clear photos illustrate the insects' distinguishing physical characteristics, while habitats, seasonality, and common names are provided in easy-to-understand yet scientifically accurate language. The guide will be welcomed by everyone who wants to learn more about fireflies' and glow-worms' unique traits and fragile niche in the ecosystem. Features: Over 600 color photographs Detailed accounts and anatomical diagrams of 75+ species, as well as aids in distinguishing between similar species A first-of-its-kind flash-pattern chart that folds out on heavy-weight paper Extensive scientific details written in an understandable and engaging way Colorful common names--Twilight Bush Baby, Shadow Ghosts, Snappy Syncs, and more--for easy species identification based on flash patterns Tips on ideal sites and times of year for firefly watching Conservation-oriented approach

LYNN FRIERSON FAUST is an advisory consultant on firefly studies with state and national parks in Tennessee, South Carolina, Mississippi, Pennsylvania, and New York and an on-site scientific consultant with BBC Nature, the Discovery Channel, and National Geographic, among many other media outlets. She has also aided in identification and educational advisement for the Cincinnati Museum Center and published surveys of the fireflies of Mammoth Cave National Park, Congaree National Park, and the Allegheny National Forest. Faust has presented around the world on the topic of fireflies and published numerous scientific papers. She lives in Knoxville, Tennessee.