At the Table of Power: Food and Cuisine in the African American Struggle for Freedom, Justice, and Equality (Hardcover) 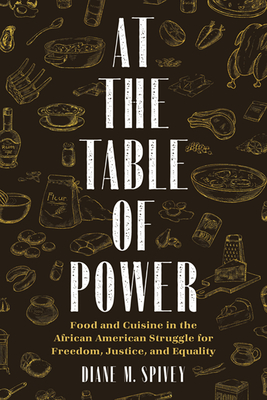 At the Table of Power is both a cookbook and a culinary history that intertwines social issues, personal stories, and political commentary. Renowned culinary historian Diane M. Spivey offers a unique insight into the historical experience and cultural values of African America and America in general by way of the kitchen. From the rural country kitchen and steamboat floating palaces to marketplace street vendors and restaurants in urban hubs of business and finance, Africans in America cooked their way to positions of distinct superiority, and thereby indispensability. Despite their many culinary accomplishments, most Black culinary artists have been made invisible—until now. Within these pages, Spivey tells a powerful story beckoning and daring the reader to witness this culinary, cultural, and political journey taken hand in hand with the fight of Africans in America during the foundation years, from colonial slavery through the Reconstruction era. These narratives, together with the recipes from the nineteenth and twentieth centuries, expose the politics of the day and offer insight on the politics of today. African American culinary artists, Spivey concludes, have more than earned a rightful place at the table of culinary contribution and power.

Diane M. Spivey is a culinary historian who has devoted more than forty years to the study and recording of African American food traditions and cooking.  She is the author of the much heralded The Peppers, Cracklings, and Knots of Wool Cookbook: The Global Migration of African Cuisine and has written articles for TheEncyclopedia of African-American Culture and History, the Black Scholar, Blackpast.org, South Florida Gourmet, the Black Book Review, Newsday, and Scribner’s Encyclopedia of World Food and Culture. Born and reared in Chicago, she and her family now reside in Palmetto Bay, Florida.

“This singularly original, meticulously researched and wonderfully written work seamlessly integrates the extensive experience of Diane Spivey as insightful historian and international cookbook writer. It skillfully weaves together the important although neglected account of the essential contribution of African cuisine in the entire history of the United States. At the Table of Power can be rewardingly enjoyed as a marvelous cookbook, as an excellent general history, or as a powerful biographical dictionary. It excels in all three categories.”  —Franklin W. Knight, coeditor of the Dictionary of Caribbean and Afro-Latin American Biography

“Diane M. Spivey has written a book that intersects African American cooks and cuisine with freedom, justice, law, and oppression. We now have a history of the professionalism of Black cuisine and the forces that have historically removed Black cooks from the center of their culinary creativity. Spivey presents an historical gentrification of African American culinary traditions that overtime has relegated cooks to the periphery of their history and traditions. This book documents and illustrates the presence of race in determining the status of African American culinary artists overtime limiting their growth and command of their culture.” —Samuel W. Black, director of the African American Program at the Senator John Heinz History Center


“Diane M. Spivey has compellingly moved Black cooks, chefs, caterers, and cuisine from the shadows into the floodlights of foodways in the United States and the Caribbean. With an amalgam of African, Native American, and European sources, she has put to rest the traditional narrative with sound scholarship and illustrative recipes. This book is a must to understand the African American story in its full dimensions.” —Robert L. Harris, Jr., professor emeritus of African American history and American studies at the Africana Studies and Research Center, Cornell University