Letters and Homilies for Hellenized Christians: A Socio-Rhetorical Commentary on Titus, 1-2 Timothy and 1-3 John (Paperback) 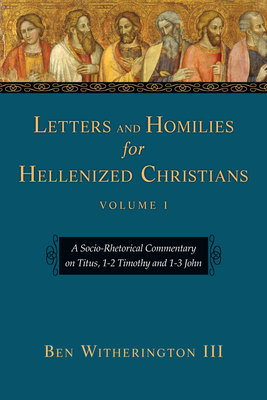 The study of the so-called General or Catholic Epistles has been hampered, argues Ben Witherington, by the failure to properly discern their genre. Several of these letters are much better understood as homilies--although, like the rest of the New Testament, they are situation specific. In this first of three volumes, Witherington extends his innovative socio-rhetorical analysis of New Testament books to the latter-Pauline and non-Pauline corpora, placing each text within its socioreligious milieu and illuminating the particular issues that confronted each congregation as well as the rhetorical strategies employed by each author in addressing those issues. Throughout, Witherington shows his thorough knowledge of recent literature on these texts and focuses his attention on the unique insights brought about through socio-rhetorical analysis that either reinforce or correct those gleaned from other approaches. Strikingly, based on his rhetorical analysis of the Pastorals, he makes the case for Luke as Paul's amanuensis for these letters. He also makes a strenuous argument against New Testament pseudepigrapha. Bridging the Horizons sections point to the relevance of the text for believers today, making this volume of special value to pastors and general readers as well as to students and scholars.