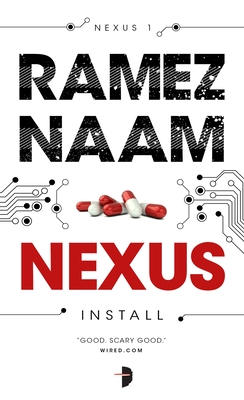 This is book number 1 in the Nexus Arc series.

Winner of the 2014 Prometheus Award

Mankind gets an upgrade

When a young scientist is caught improving Nexus, he’s thrust over his head into a world of danger and international espionage – for there is far more at stake than anyone realizes.

From the halls of academe to the halls of power, from the headquarters of an elite US agency in Washington DC to a secret lab beneath a top university in Shanghai, from the underground parties of San Francisco to the illegal biotech markets of Bangkok, from an international neuroscience conference to a remote monastery in the mountains of Thailand – Nexus is a thrill ride through a future on the brink of explosion.

Ramez Naam is a professional technologist, and was involved in the development of Microsoft Internet Explorer and Outlook. He holds a seat on the advisory board of the Institute for Accelerating Change, is a member of the World Future Society, a Senior Associate of the Foresight Institute, and a fellow of the Institute for Ethics and Emerging Technologies.

His novels has been nominated for the Kitscie Award for Best Debut, the Prometheus Award, and the Arthur C. Clarke Award. He is a 2014 nominee for the John W. Campbell Award for Best New Writer.

"Provocative... A double-edged vision of the post-human."
- The Wall Street Journal

"A lightning bolt of a novel, with a sense of awe missing from a lot of current fiction."
- Ars Technica

"Starred Review. Naam turns in a stellar performance in his debut SF novel... What matters here is the remarkable scope and narrative power of the story."
- Booklist

"A gripping piece of near future speculation... all the grit and pace of the Bourne films."
- Alastair Reynolds, author of Revelation Space

"The most brilliant hard SF thriller I've read in years. Reminds me of Michael Crichton at his best."
- Brenda Cooper, author of The Creative Fire

"A rich cast of characters...the action scenes are crisp, the glimpses of future tech and culture are mesmerizing."
- Publishers Weekly