Scoops: The BBC's Most Shocking Interviews from Prince Andrew to Steven Seagal (Hardcover) 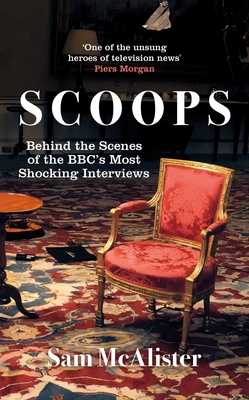 Sam McAlister was the first in her family to go to university, before training to be a criminal barrister. As a single mum, she decided her real passion was in news. Now BAFTA-nominated for her work with BBC Newsnight, McAlister’s hard-won exclusives have shaped the public conversation.

She is the woman who clinched the 2019 interview with Prince Andrew, described as ‘a plane crashing into an oil tanker, causing a tsunami, triggering a nuclear explosion’. She is many things beside: the first in her family to go to university; a trained barrister; a single mum; a master of persuasion. In her former BBC colleagues’ words, she was the ‘booker extraordinaire’, responsible for many of Newsnight’s exclusives over the past decade, including Stormy Daniels, Sean Spicer, Brigitte Höss, Steven Seagal, Mel Greig and Julian Assange.

After 12 years producing content for Newsnight, McAlister reflects with candour on her experience, sharing not just the secrets of how the best news gets made, but also the changes to the BBC, the future of ‘mainstream media’ in the age of clickbait and the role of power and privilege in shaping our media landscape.

This is a backstage pass to the most unforgettable journalism of our times.

‘Sam McAlister is a force of nature – she’s relentlessly pursued scoops for her entire career. And this is the book to prove it.’
— Steph McGovern

‘Sam delivers where others fail. She has a zinger of a story to tell.’
— Huw Edwards

‘Even though we know what happened, McAlister’s eye-witness description of the royal car-crash retains the power to shock… riveting.’
— Sunday Telegraph

‘A good television news interview requires organisational skill and news instinct, not just from the interviewer, but from the producers who support them. Sam McAlister clearly has both in abundance… The book sheds light on the often unacknowledged efforts of producers, as well as on life at the BBC.’
— TLS