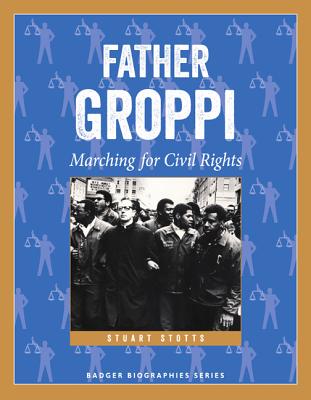 By Stuart Stotts
$12.95
It's Complicated--Contact Us for More Information

"Father Groppi: Marching for Civil Rights" tells the story of Father James Groppi, a Catholic priest from Milwaukee, Wis., who stood up for civil rights in the 1960s and 1970s.

This important new addition to the Badger Biographies series for young readers also tells about a turbulent time in Wisconsin history and sheds light on the civil rights movement and its place in the North.

Growing up on the south side of Milwaukee as the son of Italian immigrants, young James Groppi learned early on what it felt like to be made fun of just because of who you are, and he learned to respect people from other races and ethnic groups. Later, while studying to become a priest, he saw the discrimination African Americans faced. It made him angry, and he vowed to do whatever he could to fight racism.

Father Groppi marched with Dr. Martin Luther King Jr. and other leaders of the civil rights movement. But he knew there was work to be done in his own city. In Milwaukee, he teamed up with the NAACP and other organizations, protesting discrimination and segregation wherever they saw it. It wasn't always easy, and Father Groppi and the other civil rights workers faced great challenges.

Stuart Stotts is a singer and songwriter and storyteller and has written several books for young readers, including the Badger Biographies Curly Lambeau: Building the Green Bay Packers and Lucius Fairchild: Civil War Hero.

Wisconsin Historical Society Press publishes some great Badger State books for adults on everything from bowling alleys to bars, history to nature to sports and more. But, the Madison-based publisher also dishes up new titles each year in its great Badger Biographies series for young readers ages 7 and up.
The series has nearly two dozen titles, spotlighting Curly Lambeau, Frank Lloyd Wright, Bob La Follette, Les Paul and many others. What’s nice is that the books, which are illustrated, are invariably well-written and never talk down to young readers.
I’m especially excited by the two newest titles, which focus on Milwaukee legends.
"Father Groppi: Marching for Civil Rights" – written by Stuart Stotts, who also wrote books in the series on Lucius Fairchild and Lambeau – traces the story of one of the state’s most influential Italian Americans. Groppi was born to Tuscan emigrants in Bay View, and went on to become an outspoken supporter of Civil Rights.
In addition to explaining Groppi’s work in the fights for fair housing and desegregated schools, the book also looks at Milwaukee’s neighborhood’s, Groppi’s early life, the great migration from the south to the north and the national Civil Rights movement.
The publisher tapped Barbara Manger and Janine Smith for "Mary Nohl: A Lifetime in Art." The two also wrote a book for adults about Nohl a couple years ago.
Nohl is the late artist who made her unique home on Milwaukee’s North Shore; the Fox Point home has come to be called the witch’s house, though Nohl was no witch.
No, Nohl was a prolific creator of colorful, fanciful artworks. That work, along with her mystique helped define her as Milwaukee’s premier outsider artist. This biography explores her life and her work, adding a great section of color photographs of her work and a glossary of terms for young readers, too.
Both titles belong in any Milwaukee kid’s library. (Bobby Tanzilo, OnMilwaukee.com)