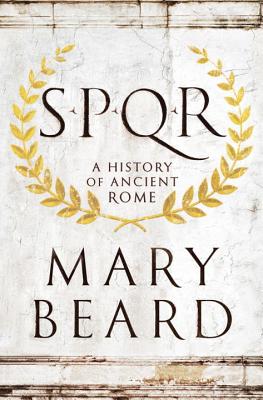 Informed by the many new discoveries and interpretations of contemporary scholarship, yet eminently readable and conversational in tone, Beard engagingly reexamines what we know of ancient Roman history, in process revising many myths of its thousand year span.

A sweeping, revisionist history of the Roman Empire from one of our foremost classicists.

Ancient Rome was an imposing city even by modern standards, a sprawling imperial metropolis of more than a million inhabitants, a "mixture of luxury and filth, liberty and exploitation, civic pride and murderous civil war" that served as the seat of power for an empire that spanned from Spain to Syria. Yet how did all this emerge from what was once an insignificant village in central Italy? In S.P.Q.R., world-renowned classicist Mary Beard narrates the unprecedented rise of a civilization that even two thousand years later still shapes many of our most fundamental assumptions about power, citizenship, responsibility, political violence, empire, luxury, and beauty.

From the foundational myth of Romulus and Remus to 212 ce—nearly a thousand years later—when the emperor Caracalla gave Roman citizenship to every free inhabitant of the empire, S.P.Q.R. (the abbreviation of "The Senate and People of Rome") examines not just how we think of ancient Rome but challenges the comfortable historical perspectives that have existed for centuries by exploring how the Romans thought of themselves: how they challenged the idea of imperial rule, how they responded to terrorism and revolution, and how they invented a new idea of citizenship and nation.

Opening the book in 63 bce with the famous clash between the populist aristocrat Catiline and Cicero, the renowned politician and orator, Beard animates this “terrorist conspiracy,” which was aimed at the very heart of the Republic, demonstrating how this singular event would presage the struggle between democracy and autocracy that would come to define much of Rome’s subsequent history. Illustrating how a classical democracy yielded to a self-confident and self-critical empire, S.P.Q.R. reintroduces us, though in a wholly different way, to famous and familiar characters—Hannibal, Julius Caesar, Cleopatra, Augustus, and Nero, among others—while expanding the historical aperture to include those overlooked in traditional histories: the women, the slaves and ex-slaves, conspirators, and those on the losing side of Rome’s glorious conquests.

Like the best detectives, Beard sifts fact from fiction, myth and propaganda from historical record, refusing either simple admiration or blanket condemnation. Far from being frozen in marble, Roman history, she shows, is constantly being revised and rewritten as our knowledge expands. Indeed, our perceptions of ancient Rome have changed dramatically over the last fifty years, and S.P.Q.R., with its nuanced attention to class inequality, democratic struggles, and the lives of entire groups of people omitted from the historical narrative for centuries, promises to shape our view of Roman history for decades to come.

A professor of classics at Cambridge University, Mary Beard is the author of the best-selling SPQR and Women & Power and the National Book Critics Circle Award–nominated Confronting the Classics. A popular blogger and television personality, Beard is a regular contributor to the New York Review of Books.

This book tracks the rise of Rome from backwater village to imperial city, spreading its power from Syria to Spain by 63 BCE, staring down resisters, and originating the idea of nation and citizenship. Included here are the stories not just of Julius Caesar but the butcher, the baker, and the candlestick maker—and certainly women and slaves.
— Barbara Hoffert - Library Journal

In SPQR, her wonderful concise history, Mary Beard unpacks the secrets of the city’s success with a crisp and merciless clarity that I have not seen equaled anywhere else…. We tend to think of the Romans as coarser successors to the Greeks. Yet Beard, who doubles as a Cambridge professor and a television lecturer of irresistible salty charm, shows us how the Roman Republic got underway at almost the same time as the Athenian democracy. And it evolved into just the kind of mixed system that sophisticated commentators like Aristotle and Polybius approved of.

Beard does precisely what few popularizers dare to try and plenty of dons can’t pull off: She conveys the thrill of puzzling over texts and events that are bound to be ambiguous, and she complicates received wisdom in the process. Her magisterial new history of Rome, SPQR…is no exception…. The ancient Romans, Beard shows, are relevant to people many centuries later who struggle with questions of power, citizenship, empire, and identity.

A masterful new chronicle…. Beard is a sure-footed guide through arcane material that, in other hands, would grow tedious. Sifting myth from fact in dealing with the early history of the city, she enlivens—and deepens—scholarly debates by demonstrating how the Romans themselves shaped their legendary beginnings to short-term political ends…. Exemplary popular history, engaging but never dumbed down, providing both the grand sweep and the intimate details that bring the distant past vividly to life.
— The Economist

Where SPQR differs most from the standard history is in its clear-sighted honesty…. Beard tells this story precisely and clearly, with passion and without technical jargon…. SPQR is a grim success story, but one told with wonderful flair.

[Beard] is no myth builder; she is a scholar who reaches down-to-earth conclusions based on her years of dedication to her subject…. She is able to step back to see the entire Roman world…. She shows us how to engage with the history, culture, and controversies that made Rome—and why it still matters. Beard's enthusiasm for her subject is infectious…. Lovers of Roman history will revel in this work, and new students will quickly become devotees.
— Kirkus Reviews, Starred Review

[Fun] helps define what sets Beard apart as commentator and what sets SPQR apart from other histories of Rome. Though she here claims that 50 years of training and study have led up to SPQR, Beard wears her learning lightly. As she takes us through the brothels, bars, and back alleys where the populus Romanus left their imprint, one senses, above all, that she is having fun.

Monumental…. A triumphant Roman read that is sure to appear on school curricula and holiday wishlists alike.
— Carly Silver - Shelf Awareness