Krishna and the Later Avatars of Vishnu: Plus Mahabharata Demystified (Paperback) 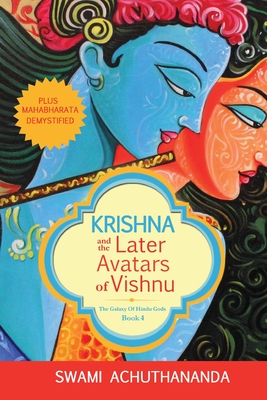 Krishna is the single most beloved figure in Hinduism. Such is his popularity that he is considered a supreme god in his own right even though he is only an avatar. In this book, we journey through Krishna's life--spanning his birth, childhood, youth, and adulthood--and describe many of the delightful stories associated with him. We also examine the Mahabharata War in which he plays a major non-combat role.

Although the purpose of his incarnation was to end the life of the demon king Kamsa, Krishna turned into a larger-than-life figure with his childhood pranks and adolescent romances. Starting with a miraculous birth-that has parallels to the birth of Jesus-Krishna grew up as an ordinary, but adorable child. In his youth, he became the heartthrob of milkmaids and popularized the passionate romantic dance Rasa Lila, together with his childhood sweetheart Radha. The annihilation of Kamsa followed thereafter. By this time the purpose of his incarnation was accomplished, but he stayed back on Earth to play a major part in the Mahabharata War. His greatest gift to humanity-the Bhagavad Gita-was delivered at this time. Maybe he overextended his stay, because his extraordinary life came to an end in less than perfect circumstances.

The Mahabharata occupies a significant portion of this book. With a complex plot and a myriad of characters, the epic has surprisingly no role models, only many heroes. Yet, the Mahabharata has been the inspiration for countless books, songs, and Bollywood movies. Although this book is centered on Krishna, the remaining avatars of Vishnu-particularly Buddha-are also explored at length.