The Collected Poems of Wallace Stevens: The Corrected Edition (Paperback) 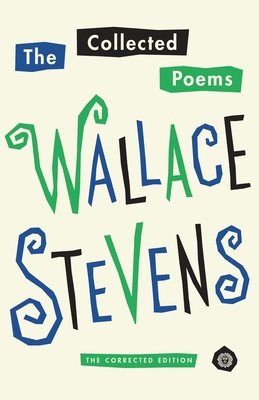 An essential book for all readers of poetry, and the definitive collection from the man Harold Bloom has called “the best and most representative American poet."

Originally published in 1954 to honor Stevens’s seventy-fifth birthday, the book was rushed into print for the occasion and contained scores of errors. These have now been corrected in one place for the first time by Stevens scholars John N. Serio and Christopher Beyers, based on original editions and manuscripts.

The Collected Poems is the one volume that Stevens intended to contain all the poems he wished to preserve, presented in the way he wanted. It is an enduring monument to his dazzling achievement.

Wallace Stevens was born in Reading, Pennsylvania, in 1879 and died in Hartford, Connecticut, in 1955. Harmonium, his first volume of poems, was published in 1923, and was followed by Ideas of Order (1936), The Man with the Blue Guitar (1937), Parts of a World (1942), Transport to Summer (1947), The Auroras of Autumn (1950), The Necessary Angel (a volume of essays, 1951), The Collected Poems of Wallace Stevens (1954), and Opus Posthumous (1957; revised and corrected in 1989). Stevens was awarded the Bollingen Prize in Poetry of the Yale University Library for 1949. He twice won the National Book Award in Poetry and was awarded the Pulitzer Prize in Poetry in 1955. From 1916 on, he was associated with the Hartford Accident and Indemnity Company, of which he became vice president in 1934.

“After the reader has admired certain lines because Shakespeare might have written them, he begins to admire them because only Stevens could.” —Robert Fitzgerald

“One might as well argue with the Evening Star as find fault with so much wit and grace and intelligence . . . such an overwhelming and exquisite command both of the words and of the rhythms of our language; such charm and irony, such natural and philosophical breadth of sympathy, such dignity and magnanimity.” —Randall Jarrell