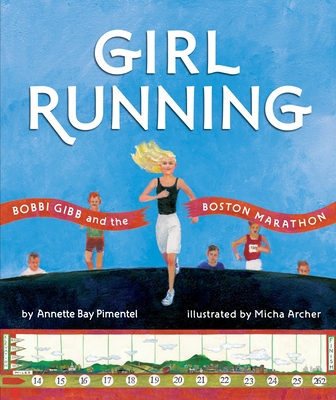 * "A bright salutation of a story, with one determined woman at its center."--Kirkus Reviews, starred review

The inspiring story of the first female to run the Boston Marathon comes to life in stunningly vivid collage illustrations.

Because Bobbi Gibb is a girl, she's not allowed to run on her school's track team. But after school, no one can stop her--and she's free to run endless miles to her heart's content. She is told no yet again when she tries to enter the Boston Marathon in 1966, because the officials claim that it's a man's race and that women are just not capable of running such a long distance. So what does Bobbi do? She bravely sets out to prove the naysayers wrong and show the world just what a girl can do.

Annette Bay Pimentel loves true stories about real people. She also wrote the picture book Mountain Chef: How One Man Lost His Groceries, Changed His Plans, and Helped Cook Up the National Park Service. She spends her days reading nonfiction picture books and reviewing them on her website, researching in libraries, and writing about the people she discovers.

Micha Archer wrote and illustrated Daniel Finds a Poem, and has also illustrated several books for educational presses, including The Wise Fool and Lola's Fandango. Working in collage and oil, her use of color and pattern is influenced by the folk art, crafts, and architecture of the countries she has visited and lived in. She realized the importance of the book as a teaching tool after teaching kindergarten and raising two children. Micha divides her time between Costa Rica and western Massachusetts, where she lives in the house she and her husband built, surrounded by gardens and forest to roam in.

* “Pimentel tenders the story of Bobbi Gibb, the first woman to (surreptitiously) run the classic Boston Marathon, with illustrations that pay close attention to the route along the way. . . . It is as though Gibb is on one long runner's high, and it's good fun to run along with her. . . . [Archer’s] artwork is an eyeful, a deep-dish mixture of oil paint and collage with tissue paper and hand-stamped patterned papers as materials. In addition, she adds mile markers and elevation notes to convey the runners' toils and why it is called "Heartbreak Hill." . . . A bright salutation of a story, with one determined woman at its center.”—Kirkus Reviews, starred review

“Bobbi Gibb found joy in running before it was an activity women were encouraged or even allowed to participate in. Faced with enormous obstacles (including having available running gear), Gibb went on to become the first woman to complete the Boston Marathon, blazing the trail for thousands of women to come. The story does justice to Gibb’s dream. . . . The lush collage-style illustrations are a highlight, specifically the clever mile marker and elevation indicators which stretch across the pages as Gibb runs the race. The closing image nicely incorporates the names of other female marathoners as a tribute. An inspiring addition to picture book biography collections.”—School Library Journal

“Pimentel introduces Bobbi Gibb, who in 1966 became the first woman to run the Boston Marathon, in an affectionate portrait informed by interviews with Gibb herself. In textured collages, Archer creates a cozy community of autumn leaves, spring fields, and quaint rooftops, against which Gibb trains for the marathon. . . . Gibb finishes the race to acclaim, opening the door for other dedicated women runners. A triumphant story of an athlete and spirited individual.”—Publishers Weekly

"The illustrations are brightly colored collages that fill the pages from edge to edge. . . . The artist has included mile markers and notes about the course elevation to help the reader understand how difficult the marathon is. This simple story will leave all types of readers cheering for a woman who believed in herself and worked hard to make her dreams come true. This would be a great addition to a story time about sports or successful women."—School Library Connection

“Pimentel delivers a sharply focused, hard-pounding narrative, and Archer supplies inventive oil and collage artwork worthy of the text. . . . An afterword on Gibb’s subsequent marathons, notes on the use of her maiden name and on quotation sources, and a selected bibliography are appended, and the final spread featuring the names of women marathon winners gives viewers leads on other stories worth investigating.”—The Bulletin of the Center for Children’s Books

“Clear on Gibb’s determination to overcome discrimination in order to follow her passion. . . . Pimentel’s straightforward text builds drama and suspense, becoming appropriately staccato and urgent when describing the race. Archer’s vibrant mixed-media and collage art portrays a variety of settings, seasons, and situations; a nice touch is the bottom-of-the-page border marking the miles as we follow Bobbi’s progress along the marathon route.”—The Horn Book