The Midwife's Tale: A Mystery (Paperback) 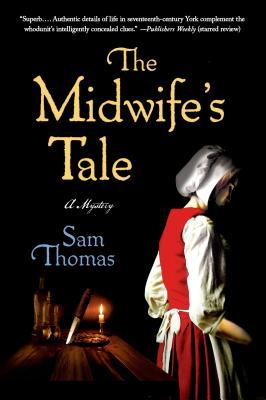 The midwife of the title uses her authority - unique power for a 17th century Englishwoman - to investigate a murder, this in a besieged York during the English Civil War.  Thomas is an historian as well as a storyteller and throws in such fun stuff as the town "gossips" being a de facto female intelligence service.Gary

It is 1644, and Parliament's armies have risen against the King and laid siege to the city of York. Even as the city suffers at the rebels' hands, midwife Bridget Hodgson becomes embroiled in a different sort of rebellion. One of Bridget's friends, Esther Cooper, has been convicted of murdering her husband and sentenced to be burnt alive. Convinced that her friend is innocent, Bridget sets out to find the real killer.

Bridget joins forces with Martha Hawkins, a servant who's far more skilled with a knife than any respectable woman ought to be. To save Esther from the stake, they must dodge rebel artillery, confront a murderous figure from Martha's past, and capture a brutal killer who will stop at nothing to cover his tracks. The investigation takes Bridget and Martha from the homes of the city's most powerful families to the alleyways of its poorest neighborhoods. As they delve into the life of Esther's murdered husband, they discover that his ostentatious Puritanism hid a deeply sinister secret life, and that far too often tyranny and treason go hand in hand.

Sam Thomas is a barrister at 2 Bedford Row.
Sam's practice encompasses violent and financial crime, inquests and regulatory law. He provides written representations, advice and advocacy to clients facing the prospect of regulatory sanction.
He has acted as a led Junior and a Junior alone in complex confiscation and cash forfeiture hearings.

“A determined midwife must solve a murder to save a friend from a horrible end. . . . Historian Thomas' fiction debut is packed with fascinating information about a midwife's skills and life during the English civil war. The ingenious, fast-paced mystery is a bonus.” —Kirkus Reviews

“Thomas' York teems with filthy streets and bawdy wine-soaked revelries. But nothing is more drenched in bloody, breathing realism than Bridget's life, and career. . . . Thomas does an admirable job keeping all of these balls aloft. He concludes with a satisfying twist that few readers will see coming. But as pleasurable as his mystery is, the true thrill here is Thomas' lively portrait of 1644 York and his unique heroine.” —Cleveland Plain Dealer