The Year Without Summer: 1816 and the Volcano That Darkened the World and Changed History (Paperback) 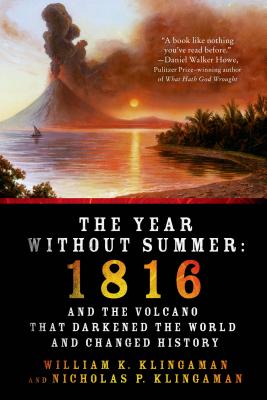 By William K. Klingaman, Nicholas P. Klingaman
$18.99
It's Complicated--Contact Us for More Information

An astounding study in climate change in the aftermath of a monster volcanic eruption (10 times the force of Krakatoa). This single natural event had world-wide consequences: New England blizzards in June; European food riots; panicking establishment of fringe religious sects; mass population shifts; even the composition of Mary Shelley's Frankenstein.  What a year!

Like Winchester's Krakatoa, The Year Without Summer reveals a year of dramatic global change long forgotten by history

In the tradition of Krakatoa, The World Without Us, and Guns, Germs and Steel comes a sweeping history of the year that became known as 18-hundred-and-froze-to-death. 1816 was a remarkable year—mostly for the fact that there was no summer. As a result of a volcanic eruption at Mount Tambora in Indonesia, weather patterns were disrupted worldwide for months, allowing for excessive rain, frost, and snowfall through much of the Northeastern U.S. and Europe in the summer of 1816.

In the U.S., the extraordinary weather produced food shortages, religious revivals, and extensive migration from New England to the Midwest. In Europe, the cold and wet summer led to famine, food riots, the transformation of stable communities into wandering beggars, and one of the worst typhus epidemics in history. 1816 was the year Frankenstein was written. It was also the year Turner painted his fiery sunsets. All of these things are linked to global climate change—something we are quite aware of now, but that was utterly mysterious to people in the nineteenth century, who concocted all sorts of reasons for such an ungenial season.

Making use of a wealth of source material and employing a compelling narrative approach featuring peasants and royalty, politicians, writers, and scientists, The Year Without Summer by William K. Klingaman and Nicholas P. Klingaman examines not only the climate change engendered by the volcano, but also its effects on politics, the economy, the arts, and social structures.

WILLIAM K. KLINGAMAN has taught at the University of Virginia and the University of Maryland. He is the co-author The Year Without Summer with Nicholas P. Klingaman, as well as the author of narrative histories of the years 1918, 1929 and 1941.

NICHOLAS P. KLINGAMAN holds a Ph.D. in Meteorology from the University of Reading, where he is now a research scientist. He is the co-author of The Year Without Summer with William K. Klingaman. His work focuses on investigating the effects of climate change on tropical weather patterns.

“Many people in North America and Europe believed that the freezing summer of 1816 foretold the end of the world. Unaware that the invisible ash cloud that spread round the world from a volcanic eruption in Indonesia caused the aberrant weather, they thought the sun was dying. William Klingaman vividly portrays the myths and realities of that terrifying season.” —James M. McPherson, Pulitzer-Prize-winning and New York Times bestselling author of Battle Cry of Freedom, Crossroads of Freedom, Abraham Lincoln and the Second American Revolution, and For Cause and Comrades

“When a volcanic eruption on a Pacific island swathed the earth with droplets, producing freakish weather that ruined harvests all over the world, how did people react? William and Nicholas Klingaman tell us how the year without summer affected an astonishing variety of people on different continents, including rulers and peasants, working families, Jane Austen and Mary Shelley. A book like nothing you've read before.” —Daniel Walker Howe, Pulitzer-Prize-winning author of What Hath God Wrought: The Transformation Of America

“William K. Klingaman's groundbreaking work will forever alter the way we view the years immediately following the War of 1812. Beautifully written in prose that will excite both expert and layman, it tells the remarkable story-in superb detail-of how in April 1815 the severest volcanic eruption in 2000 years on Mount Tambora disrupted the earth's weather profoundly, and with it, the politics, economics, arts, and religious beliefs of an era. In every respect this is a marvelous book, impossible to put down.” —George C. Daughan author of 1812: The Navy's War

“Klingaman's vibrant narrative carries us from Indonesia to Ohio as it traces the global effects of the Mt. Tambora eruption. The Year Without Summer is as dexterous at explaining the science of climatology as it is at describing how the endless rain in Geneva figured into Byron's poetry or how New Englanders saw God's wrath in the summer snowstorms that froze their fields.” —Steven Biel, author of Down with the Old Canoe: A Cultural History of the Titanic Disaster

“Massive volcanic cataclysm, ash and global cold, failed harvests, social unrest, and Frankenstein to boot: Klingaman paints an intriguing, multilayered picture of the year when global climate went mad and a lot of people went hungry. The Year Without Summer is a sobering reminder of humanity's vulnerability to natural disasters--in a world with far fewer inhabitants than today.” —Brian Fagan, author of Beyond the Blue Horizon, The Great Warming and Elixir: A History of Water and Humankind

“Intrigued by the weather? You will be after reading The Year Without Summer. Writing with verve and flair, author William Klingaman shows how in 1816 an event in the Far East dramatically influenced weather patterns in Europe and the United States, causing summer blizzards, flooding, and deadly famines. This is a disquieting, but important, story that throws light on global weather patterns and our precarious hold on life.” —John Ferling author of Independence, Almost a Miracle, and Setting the World Ablaze

“The Year Without Summer puts Krakatoa in the shade. This is an erudite, vivid, and fast-paced narrative of the extraordinary consequences of the largest and deadliest known volcanic eruption in history. Linking the stories of a cast of royal, political and literary characters - Louis XVIII, Madison, Napoleon and Byron among them - as well as laborers, seafarers and rabble-rousers, William and Nicholas Klingaman help us visualize and understand how a remote Indonesian volcano helped to foment social, economic and political turmoil on both sides of the Atlantic.” —Clive Oppenheimer, author of Eruptions That Shook the World and Volcanoes

“A thought-provoking account describing the far-reaching and long-lasting effects on Europe and America of a single volcanic eruption in the tropics. Tambora's 1815 outburst caused changes in weather patterns with negative impact on agriculture, resulting in famine and disease. Riots and political discord followed and worsened the socio-economic consequences of the Napoleonic wars in Europe. Such an aftermath provides a warning for what our living earth may have in store for the future.” —Dr. Jelle Zeilinga de Boer, author of Volcanoes in Human History and Earthquakes in Human History

“The Year Without Summer shows how a volcanic eruption in Indonesia transformed life in the United States and Europe. William and Nicholas Klingaman have placed 1816 on the list of pivotal years in history and have provided a compelling account of the mushrooming effects of a natural disaster. This is environmental and world history at its finest.” —Louis P. Masur, author of The Civil War, 1831, and The Soiling of Old Glory

“A great book about one of the least known and most devastating natural disasters in history.” —Theodore Steinberg, author of Acts of God and Down to Earth

“The Klingamans lay out the scientific details of the disaster in a lucid, easily digestible manner. They also effectively integrate the natural calamities into a narrative that includes the political and social milieu of Europe and North America. This is an engrossing work that illustrates the fragility of societies when confronted with sudden and severe disruption of weather patterns.” —Booklist

“An intriguing sidelight on the effects of climate change.” —Kirkus Reviews