A Passion for Paris: Romanticism and Romance in the City of Light (Hardcover) 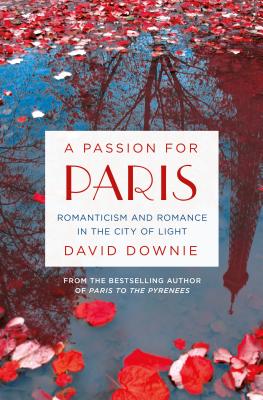 By David Downie
Not Available
Out of Print

Anyone who loves Paris will love this unique combination of memoir, history and travelogue by bestselling author David Downie.

— From A PASSION FOR PARIS: ROMANTICISM AND ROMANCE IN THE CITY OF LIGHT

"A top-notch walking tour of Paris. . . . The author's encyclopedic knowledge of the city and its artists grants him a mystical gift of access: doors left ajar and carriage gates left open foster his search for the city's magical story. Anyone who loves Paris will adore this joyful book. Readers visiting the city are advised to take it with them to discover countless new experiences." —Kirkus Reviews (starred)

A unique combination of memoir, history, and travelogue, this is author David Downie's irreverent quest to uncover why Paris is the world's most romantic city—and has been for over 150 years.

Abounding in secluded, atmospheric parks, artists' studios, cafes, restaurants and streets little changed since the 1800s, Paris exudes romance. The art and architecture, the cityscape, riverbanks, and the unparalleled quality of daily life are part of the equation.

But the city's allure derives equally from hidden sources: querulous inhabitants, a bizarre culture of heroic negativity, and a rich historical past supplying enigmas, pleasures and challenges. Rarely do visitors suspect the glamor and chic and the carefree atmosphere of the City of Light grew from and still feed off the dark fountainheads of riot, rebellion, mayhem and melancholy—and the subversive literature, art and music of the Romantic Age.

Weaving together his own with the lives and loves of Victor Hugo, Georges Sand, Charles Baudelaire, Balzac, Nadar and other great Romantics Downie delights in the city's secular romantic pilgrimage sites asking , Why Paris, not Venice or Rome—the tap root of "romance"—or Berlin, Vienna and London—where the earliest Romantics built castles-in-the-air and sang odes to nightingales? Read A Passion for Paris: Romanticism and Romance in the City of Light and find out.

DAVID DOWNIE, a native San Franciscan, lived in New York, Providence, Rome and Milan before moving to Paris in the mid-80s. He divides his time between France and Italy. His travel, food and arts features have appeared in leading print and on-line publications including Bon Appétit, Gourmet, Saveur, Epicurious.com, and Gault & Millau, the premier French food guide. He is the author of over a dozen nonfiction books, including the highly acclaimed Paris, Paris and A Passion for Paris.

“If you're interested in colorful history and literature, A Passion For Paris is the book for you. Read it before you visit or return to the city-you'll be the richer for it.” —Rudy Maxa, Host of America’s #1 travel radio show, “Rudy Maxa’s World”

“From its alleys and ateliers to its cafes and cathedrals, Downie crafts an infatuated valentine to the City of Light” —National Geographic Traveler Magazine

“I want to highly recommend a book... We can never get enough of Paris!” —Liz Smith, NewYorkSocialDiary.com

“150 years' worth of reasons why the city merits the epithet.” —Journeys magazine

“A top-notch walking tour of Paris… Downie is the consummate guide…The author's encyclopedic knowledge of the city and its artists grants him a mystical gift of access: doors left ajar and carriage gates left open foster his search for the city's magical story. Anyone who loves Paris will adore this joyful book. Readers visiting the city are advised to take it with them to discover countless new experiences.” —Kirkus, STARRED review

“Paris has been cherished, admired, analyzed for centuries, yet in his wildly entertaining, operatic A Passion for Paris, David Downie seems to offer up a whole new place. Writing with an engaging informality, he delves into this most romantic of cities, then and now, focusing particularly on the Romantic Age and its people. . . . Whether the author is leading us into Flaubert's study or onto the terrace of today's Deux Magots, there's a rare excitement in the air--as if Puccini's Bohemians were united in song, somewhere off stage.” —Penelope Rowlands, author of Paris Was Ours

“Victor Hugo, Adèle and Juliette, Saint-Beuve, Nadar, George Sand and a host of other great figures of French history come alive in David Downie's compelling and often wickedly humorous investigation of romance and romanticism in the City of Light. Most travelers agree that Paris is by far the most romantic city in the world but thanks to Downie's extensive research, passionate sleuthing and inspired imagination, they'll now know why. This unusual and exquisitely told tale of French romanticism is a must-read for true Paris lovers.” —Harriet Welty Rochefort, author of French Toast and Joie de Vivre

“An entertaining read. David Downie is fabulous company!” —Jacki Lyden, "All Things Considered," NPR on On Paris to the Pyrenees

“Downie's adroit, learned, and ambitious book reinvigorates my sense of travel, taking me back to the happy knowledge that the world is still large, and history unfathomably deep.” —Frances Mayes, author of Under the Tuscan Sun on On Paris to the Pyrenees

“David Downie is the master of educated curiosity. I have walked some of the city's streets with him, and reading this book is just as tactile an experience.” —Michael Ondaatje on Paris, Paris