The Exiles Return: A Novel (Paperback) 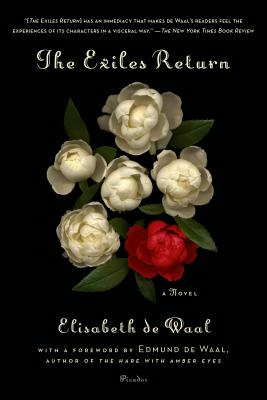 WITH A FOREWORD BY EDMUND DE WAAL, AUTHOR OF THE HARE WITH AMBER EYES

Vienna is demolished by war, the city an alien landscape of ruined castles, a fractured ruling class, and people picking up the pieces. Elisabeth de Waal's mesmerizing The Exiles Return is a stunningly vivid postwar story of Austria's fallen aristocrats, unrepentant Nazis, and a culture degraded by violence.

The novel follows a number of exiles, each returning under very different circumstances, who must come to terms with a city in painful recovery. There is Kuno Adler, a Jewish research scientist, who is tired of his unfulfilling existence in America; Theophil Kanakis, a wealthy Greek businessman, seeking to plunder some of the spoils of war; Marie-Theres, a brooding teenager, sent by her parents in hopes that the change of scene will shake her out of her funk; and Prince "Bimbo" Grein, a handsome young man with a title divested of all its social currency.

With immaculate precision and sensitivity, de Waal, an exile herself, captures a city rebuilding and relearning its identity, and the people who have to do the same. Mesmerizing and tragic, de Waal has written a masterpiece of European literature, an artifact revealing a moment in our history, clear as a snapshot, but timeless as well.

Elisabeth de Waal was born in Vienna in 1899. She studied philosophy, law, and economics at the University of Vienna, and completed her doctorate in 1923. She also wrote poems (often corresponding with Rilke), and was a Rockefeller Foundation fellow at Columbia. She wrote five unpublished novels, two in German and three in English, including The Exiles Return in the late 1950s. She died in 1991.

Edmund de Waal is an artist who has exhibited in museums and galleries around the world. His bestselling memoir, The Hare with Amber Eyes, has won many prizes and has been translated into twenty-nine languages. The White Road, a journey into the history of porcelain, was published in 2015. He lives in London with his family.

“[The Exiles Return] has an immediacy that makes de Waal's readers feel the experiences of its characters in a visceral way.” —The New York Times Book Review

“With the publication, after all these years, of The Exiles Return, we are allowed to hear a voice that has not only endured but, by the subtlety and fervor of its free expression, triumphed.” —Andrew Ervin, The New York Times Book Review

“A masterpiece of European literature.” —The Buffalo News

“[The Exiles Return] succeeds magnificiently on its own uncompromising terms . . . And in holding up a uniquely wrought mirror to [de Waal's] Vienna.” —San Francisco Chronicle

“Elisabeth de Waal has assembled an unusual tableau--evocative and altogether memorable . . . Here's hoping that The Exiles Return will now find the American audience that it deserves.” —Erika Dreifus, The Washington Post

“There is a distinctly fin de siècle feel to Elisabeth de Waal's rediscovered novel about Viennese exiles, banished by war, streaming back to their native city in the mid-1950s. The Exiles Return captures the atmosphere of post-World War II Vienna, with its crumbling buildings, decaying aristocracy, mercantile fervor and ideological denial. But its restrained prose style and preoccupation with the gap between public morality and private behavior evoke even more strongly the novels of Henry James, Thomas Hardy, Gustave Flaubert, Leo Tolstoy and other 19th-century masters . . . The Exiles Return is both an oddity and the bittersweet legacy of a gifted writer, melding the narrative pleasures of fiction with a vivid historical snapshot.” —Chicago Tribune

“The Exiles Return is, in a sense, a reverie about what it meant to return to postwar Vienna; a dream turned nightmare of a family wanting to recoup its wartime losses . . . The Exiles Return, a novel of five exiles returning home after fleeing Hitler, is a masterpiece of European literature.” —The Buffalo News

“[An] incisive, and tragic tale of bombarded and morally decimated postwar Vienna . . . De Waal's acid, eyewitness drama of malignant prejudice, innocence betrayed, the disintegration of the old order, and love transcendent has the same jolting immediacy as the novels of Irene Nemirovsky as well as deeply archetypal dimensions.” —Booklist

“Like Irène Némirovsky and Hans Keilson, de Waal bore witness to the tragedy of World War II; as her grandson recounts in his best-selling The Hare with Amber Eyes, their Jewish banking family's possessions were appropriated by the Germans when they marched in Austria . . . Expect poignancy and an indelible sense of the time.” —Barbara Hoffert, Library Journal (Barbara's Picks)

“An elegant, unpublished novel . . . This novel reveals [de Waal's] intelligence and articulateness as it evokes 1950s Vienna, haunted by the ghosts of its distant and more recent pasts . . . Restrained yet incisive, this finely observed novel lacks a resounding conclusion but nevertheless offers European mood music of a particular and beguiling resonance.” —Kirkus Reviews

“This is a rewarding study of loss, and a fine snapshot of a city and society standing ravaged at a crossroads.” —The Guardian (London)

“[Elisabeth de Waal] captures the fragility of a city trying to rebuild itself on uncertain foundations . . . It is an important story and now, at last, it has been told.” —The Spectator (London)

“The Exiles Return is a novel of great vividness and great tenderness, which at its heart depicts what it might mean to return from exile. Within its pages it reflects a truly ambitious writer and a woman of considerable courage.” —from Edmund de Waal's Foreword