My Grandfather's Gallery: A Family Memoir of Art and War (Paperback) 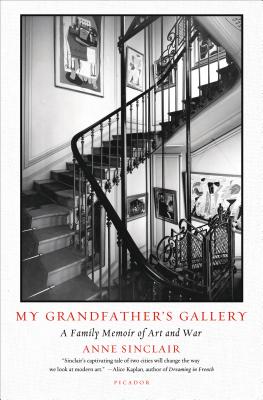 Author and French television host Anne Sinclair tells the story of her grandfather, Paul Rosenberg, the celebrated French art dealer, who fled the Nazis during World War II. Part of the legendary Paris art scene, Rosenberg knew intimately Picasso, Matisse, Braque and others and his story paints a fascinating tale of war, betrayal, and ultimately, triumph.

— From My Grandfather's Gallery - A Family Memoir of Art and War

"My Grandfather's Gallery tells Paul Rosenberg's story in bits and pieces that construct a life and a legend through association . . . A detailed and important record of twentieth century art."-The Boston Globe

On September 20, 1940, one of the most famous European art dealers disembarked in New York, one of hundreds of Jewish refugees fleeing Vichy France. Leaving behind his beloved Paris gallery, Paul Rosenberg had managed to save his family, but his paintings--modern masterpieces by the likes of Cézanne, Monet, and Sisley--were not so fortunate. As he fled, dozens of works were seized by Nazi forces, and the art dealer's own legacy was eradicated.

More than half a century later, Anne Sinclair uncovered a box filled with letters. "Curious in spite of myself," she writes, "I plunged into these archives, in search of the story of my family. To find out who my mother's father really was." Drawing on Rosenberg's intimate correspondence with Picasso, Matisse, Braque, and others, My Grandfather's Gallery takes us through the life of a legendary member of the Parisian art scene. Rosenberg's story is emblematic of millions of Jews, rich and poor, whose lives were indelibly altered by World War II, and Sinclair's journey to reclaim it paints a picture that reframes the history of twentieth-century art.

Anne Sinclair is Paul Rosenberg’s granddaughter and France’s best-known journalist. For thirteen years she was the host of 7 sur 7, a weekly news and politics television series that had some of the highest ratings in France. While there she interviewed all the major global figures of the day, including Bill Clinton, Mikhail Gorbachev, and Madonna. The director of French Huffington Post, Sinclair has written two bestselling books on politics. Until 2012 she was married to Dominique Strauss-Khan.

Shaun Whiteside is a Northern Irish translator of French, Dutch, German, and Italian literature. He has translated many novels, including Manituana and Altai by Wu Ming, The Weekend by Bernhard Schlink, and Magdalene the Sinner by Lilian Faschinger, which won him the Schlegel-Tieck Prize for German Translation in 1997.

“Sinclair's captivating tale of two cities will change the way we look at modern art.” —Alice Kaplan, author of Dreaming in French

“My Grandfather's Gallery tells Paul Rosenberg's story in bits and pieces that construct a life and a legend through association.... A detailed and important record of twentieth century art.” —The Boston Globe

“This book's fascination comes from the feeling that the reader is discreetly looking on, brought up close to the author's own emotional experience as she roams back and forth across time ... into a past that emerges as truly another country.” —The Guardian (London)

“In shifting back and forth from the Vichy years to the early 1920s to the aftermath of the war, Ms. Sinclair offers revealing glimpses into what made the gallery such a prime target for the Nazis.” —The Wall Street Journal

“Sinclair, a renowned journalist in France, pulls no punches.... [An] absorbing account.” —W

“My Grandfather's Gallery paints a vivid portrait of a moment of exceptional brilliance in French artistic life…the speed and greed with which it was so brutally destroyed, and the efficiency with which these deeds of destruction were covered up and forgotten.” —The Spectator (UK)

“More memoir than biography, this book's fascination comes from the feeling that the reader is discreetly looking on, brought up close to the author's own emotional experience as she roams back and forth across time…like a set of wistful glimpses, meticulously analysed, into a past that emerges as truly another country.” —Sue Roe, The Guardian (UK)

“[A] splendid memoir…Sinclair calls attention to the difficulties of searching out the past and of grappling with what is found there.” —Publishers Weekly

“Readers interested in WWII and art under fascism will find this a fascinating read. Sinclair's memoir contextualizes yet another aspect of this tumultuous time.” —Booklist

“An intriguing window into the art scene of the early to mid-1900s.” —Kirkus Reviews