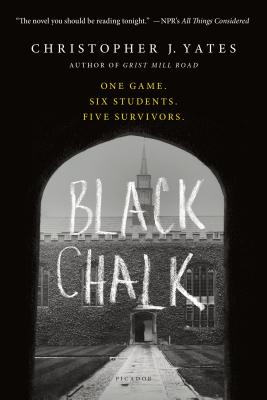 The dreadful game of Yates' Black Chalk is fairly straightforward - a series of escalating dares with escalating consequences - but the narrative is not. Constantly flitting between past and present, this story kept me perpetually off balance, and I couldn't put it down. I dare you not to get caught up in this twisting tale.

“In Black Chalk, Yates has taken the traditional novel and tweaked it to create something very special. In Thatcher-era England, six first-year Oxford University students have come together as friends. As they get to know each other, an idea forms and quickly gains traction: they should play a 'game,' with the loser facing a consequence. All six agree, and the dares begin as innocuous fun. As time goes on, however, something shifts within the group and the stakes become much higher -- even deadly. Fourteen years later, the remaining players meet in New York City to finish the 'game,' but what has transpired for them in the interim? And is winning worth the price? A gripping, sinister, and suspenseful read.”
— Peggy Elefteriades (M), R.J. Julia Booksellers, Madison, CT

"This is the smart summer thriller you've been waiting for."--NPR's All Things Considered

NAMED A MUST READ BY THE BOSTON GLOBE, BBC.COM, AND NEW YORK POST

NAMED A BEST BOOK OF THE YEAR BY NPR

It was only ever meant to be a game played by six best friends in their first year at Oxford University; a game of consequences, silly forfeits, and childish dares. But then the game changed: The stakes grew higher and the dares more personal and more humiliating, finally evolving into a vicious struggle with unpredictable and tragic results. Now, fourteen years later, the remaining players must meet again for the final round. Who knows better than your best friends what would break you?

A gripping psychological thriller partly inspired by the author's own time at Oxford University, Black Chalk is perfect for fans of the high tension and expert pacing of The Secret History and The Bellwether Revivals. Christopher J. Yates' background in puzzle writing and setting can clearly be seen in the plotting of this clever, tricky book that will keep you guessing to the very end.

CHRISTOPHER J. YATES was born and raised in Kent and studied law at Oxford University before working as a puzzle editor in London. He now lives in New York City with his wife and dog. 'Black Chalk' is his debut novel.

“This is the smart summer thriller you've been waiting for. The black and harmful little book you want in your carry-on.The novel you should be reading tonight.” —NPR's "All Things Considered

“One of the greatest surprise reveals I've witnessed. A twist that's like screwing your head on backwards. And when you see the tricky switch Yates has pulled, you just want to kiss him, because dammit if there isn't something sweet and satisfying about a plot twist pulled off with aplomb.” —NPR.org

“A circle of bright college friends who feed on one another's cleverness and trump one another's insults until the steady diet of cynicism ends in tragedy-this is the stuff of two fine first novels: Donna Tartt's The Secret History (1992) and, now, Christopher J. Yates's Black Chalk. Yates's characters are even wittier than Tartt's....Yates is a master of college-student psychology....[He] has achieved something new and impressive. Pick up Black Chalk.” —The Washington Post

“A new Stephen King, albeit with a British accent.”—New York Post

“Christopher J. Yates' debut novel is a psychological thriller about the consequences of friendship gone awry.... The result is a story littered with twists that will keep you guessing until the final page.” —Paste Magazine

“[A] sardonic psychological thriller... Yates, a crossword puzzle maker himself, sets clues firmly in place, moves back and forth in time and throws in surprises at every turn. Black Chalk is an engrossing literary guessing game.” —BBC.com

“Dark deeds among school cliques is a milieu that's attracted top-tier authors from Donna Tartt to Tana French, and this debut thriller is a worthy addition, with its chess-like psychological showdown.” —Booklist

“A compulsive page-turner that will hold your attention until the very last word.” —The Sun (London)