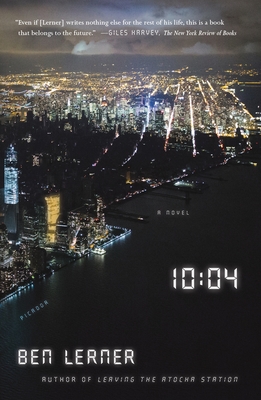 A stunning, urgent, and original novel from Ben Lerner (The Topeka School and Leaving the Atocha Station) about making art, love, and children during the twilight of an empire.

In the last year, the narrator of 10:04 has enjoyed unlikely literary success, has been diagnosed with a potentially fatal medical condition, and has been asked by his best friend to help her conceive a child. In a New York of increasingly frequent superstorms and social unrest, he must reckon with his own mortality and the prospect of fatherhood in a city that might soon be underwater.

A writer whose work Jonathan Franzen has called "hilarious . . . cracklingly intelligent . . . and original in every sentence," Lerner captures what it's like to be alive now when the difficulty of imagining a future is changing our relationship to both the present and the past.

Ben Lerner was born in Topeka, Kansas, in 1979. He has received fellowships from the Fulbright, Guggenheim, Howard, and MacArthur Foundations. His first novel, Leaving the Atocha Station, won the 2012 Believer Book Award, and excerpts from 10:04 have been awarded The Paris Review's Terry Southern Prize. He has published three poetry collections: The Lichtenberg Figures, Angle of Yaw (a finalist for the National Book Award for Poetry), and Mean Free Path. Lerner is a professor of English at Brooklyn College.

“Mr. Lerner is among the most interesting young American novelists at present . . . In 10:04. he's written a striking and important novel of New York City, partly because he's so cognizant of both past and present. He's a walker in the city in conscious league with Walt Whitman . . . We come to relish seeing the world through this man's eyes.” —Dwight Garner, The New York Times

“Just how many singular reading experiences can one novelist serve up? . . . 10:04 is a mind-blowing book; to use Lerner's own description, it's a book that's written ‘on the very edge of fiction' . . . Lerner obviously loves playing with language, stretching sentences out, folding them in on themselves, and making readers laugh out loud with the unexpected turns his paragraphs take . . . 10:04 is a strange and spectacular novel. Don't even worry about classifying it; just let Lerner's language sweep you off your feet.” —Maureen Corrigan, NPR's Fresh Air with Terry Gross

“At 240 pages, his new novel does not announce itself as a magnum opus. But given Lerner's considerable humor, rigorous intelligence, and shred breed of conscience--his bighearted spirit and formal achievement--it is. A generous, provocative, ambitious Chinese box of a novel, 10:04 is a near-perfect piece of literature, affirmative of both life and art, written with the full force of Lerner's intellectual, aesthetic, and empathetic powers, which are as considerable as they are vitalizing.” —Maggie Nelson, The Los Angeles Review of Books

“Ingenious . . . Lerner packs so much brilliance and humor into each episode. Some, like the narrator's blunders while making his donation to a hospital fertility specialist, are worthy of Woody Allen in their comic neurosis. Others yield sparkling essayistic reflections on the blurred lines between art and reality . . . This brain-tickling book imbues real experiences with a feeling of artistic possiblity, leaving the observable world ‘a little changed, a little charged'.” —Sam Sacks, The Wall Street Journal

“This is only Lerner's second novel (and he is only thirty-five), and yet to talk about mere ‘promise,' as is customary with the young, seems insufficient. Even if he writes nothing else for the rest of his life, this is a book that belongs to the future.” —Giles Harvey, New York Review of Books

“I've only reread two novels this year: John Darnielle's Wolf in White Van and Ben Lerner's 10:04 . . . they are also two of the finest works of fiction I have read in a long time . . . As much as I adored Leaving the Atocha Station, 10:04 is an improvement . . . in every single way. The book is more ambitious, more intelligent, and, somehow, even more hysterical . . . Lerner's work feels so fluid, so natural that it feels like a magic trick when he moves from meditations about fatherhood to greater considerations of the world at large without batting an eye.” —Kevin Nguyen, Grantland

“What is 10:04 by Ben Lerner? It is a book for people who like great writing--"great," here, meaning frequently brilliant, electrically hyper-conscious, extravagnatly verbose, aggressively sesquipedalian throw-the-book-across-the-room-in-despair-that-you-will-never-invent-that-metaphor-because-he-just-did writing . . . Nothing much happens, except for writing. But let me tell you: The writing happens.” —Derek Thompson, The Atlantic, "Best Book I Read This Year"

“The boundaries between 10:04 and real life are porous, and it's exciting. But none of it would matter if it weren't for Lerner's excellent prose, which is galloping yet precise, his humorous, complex scene-settings (including one of the best extended party scenes I have ever read), his charming obsessions, and poingnant world-view.” —Halimah Marcus, Electric Literature

“Deeply intelligent, just as deeply funny, and ultimately quite moving. Plus, it's the only book this year to talk about Back to the Future AND Walter Benjamin with equal insight.” —Anthony Domestico, Commonweal

“10:04, with its slippery relationship between narrator and author, its beautifully wrought sentences, and its intricate network of leitmotifs, allusions, and recurring phrases--from a jar of instant coffee to time travel, to the speech Ronald Reagan gave after the Challenger exploded--demonstrates the pleasures and insights . . . literariness can still afford.” —Daniel Hack, Public Books

“[10:04] is a beautiful and original novel . . . it signals a new direction in American fiction, perhaps a fertile one.” —Christian Lorentzen, Bookforum

“[Lerner's] concerns wrap around the modern moment with terrifying rightness . . . 10:04 describes what it feels like to be alive.” —John Freeman, The Boston Globe

“This masterful, at times dizzying novel reevaluates not just what fiction can do but what is is . . . Hilarious and incisive, Lerner's [10:04] would succeed without the layers of fiction (on reality on fiction). But with that narrative device, the book achieves brilliance, at once a study of how fiction functions and an expansive catalog of life.” —Tiffany Gilbert, Time Out New York [Five-star review]

“Lerner is talented at noticing his mind's feints and twitches, and thereby making the quotidian engaging . . . As I read 10:04 I began to feel life itself take on the numinous significance, the seriousness, or art.” —Gabriel Roth, The Slate Book Review

“Lerner, with his keen poetic eye, manages to fill 10:04 with deft, breathtaking observations and possibilities . . . If indeed, as many postmodern critics tell us, there is no longer the prospect of the certified masterpiece or the Great American Novel, Lerner has created a meaningful substitute: a thinking text for our time.” —Christopher Bollen, Interview

“10:04, Ben Lerner's ingenious new novel, is a Sebaldian book made from starkly American material . . . If we are able to see things a little differently, the novel seems to say, if amid the chaos we can locate pockets of potential--for connection, for collectivity--then there's hope. Where Sebald mourns what has been lost in translation from life, Lerner steadfastly seeks what might be found.” —Alexander Benaim, Bookforum

“Lerner writes rich, ruminative fiction . . . Like Whitman, and like W. G. Seabld and Teju Cole, Ben Lerner is a courageous chronicler of meditative ambulation, of the mind reflecting on its own vibrant thinking processes before they congeal into inert thoughts.” —Steven G. Kellman, San Francisco Chronicle

“A brilliant novel . . . As promising a second effort as Atocha Station was a debut.” —Juliet Lapidos, The New Republic

“10:04 may be the best contemporary work of meta-fiction that I've ever read.” —Emily Temple, Flavorwire

“In an era of ironic detachment and political apathy, Lerner's 10:04 makes a strong case for art that can move from irony to sincerity.” —Alisa Sniderman, The Last Magazine

“Rampant self-deprecation and deft humor . . . separates 10:04 from other novels that focus on writers writing about writing . . . Lerner has now established himself firmly in the realm of fiction, adding to his triumphs in poetry and criticism. He will prove, if not already, to be an important figure in contemporary American literature.” —Alexander Norcia, Slant Magazine

“Lerner as author is a master manipulator, immersing you into the flow of a story and then pulling you back up to the surface at will . . . What makes Lerner one of the most compelling young writers working in both fiction and poetry is that he's fascinated by, and engaging convincingly with fascinating things.” —Elisa Gabbert, Open Letters Monthly

“[10:04 is] disarmingly clever, unstintingly intelligent, and intensely a product of our contemporary moment.” —Josh Lambert, Haaretz

“Lerner conjures a compelling vision of what it means to live now, examining our ties to the past and the forces that threaten to sunder us from it.” —Joe Fassler and Margot E. Fassler, Commonweal Magazine

“Lerner's perceptiveness makes his writing not only engaging but funny . . . Ben Lerner tells a story that moves and provokes.” —Maddie Crum, The Huffington Post

“Reading Ben Lerner gives me the tingle at the base of my spine that happens whenever I encounter a writer of true originality. He is a courageous, immensely intelligent artist who panders to no one and yet is a delight to read. Anyone interested in serious contemporary literature should read Ben Lerner, and 10:04 is the perfect place to start.” —Jeffrey Eugenides, author of The Marriage Plot

“Ben Lerner is a brilliant novelist, and one unafraid to make of the novel something truly new. 10:04 is a work of endless wit, pleasure, relevance, and vitality.” —Rachel Kushner, author of The Flamethrowers

“A work so luminously original in style and form as to seem like a premonition, a comet from the future.” —Geoff Dyer, The Observer on Leaving the Atocha Station

“[A] subtle, sinuous, and very funny first novel . . . There are wonderful sentences and jokes on almost every page.” —James Wood, The New Yorker on Leaving the Atocha Station

“One of the funniest (and truest) novels . . . by a writer of his generation.” —Lorin Stein, The New York Review of Books on Leaving the Atocha Station

“Flip, hip, smart, and very funny . . . Reading it was unlike any other novel-reading experience I've had for a long time.” —Maureen Corrigan, NPR's Fresh Air with Terry Gross on Leaving the Atocha Station

“Remarkable . . . a bildungsroman and meditation and slacker tale fused by a precise, reflective and darkly comic voice.” —Gary Sernovitz, The New York Times Book Review on Leaving the Atocha Station

“The overall narrative is structured round [these] subtle, delicate moments: performances, as Adam would call them, of intense experience. They're comic in that obviously, Adam is an appalling poseur. But they're also beautiful and touching and precise.” —Jenny Turner, The Guardian on Leaving the Atocha Station

“An extraordinary novel about the intersections of art and reality in contemporary life.” —John Ashbery on Leaving the Atocha Station

“Utterly charming. Lerner's self-hating, lying, overmedicated, brilliant fool of a hero is a memorable character, and his voice speaks with a music distinctly and hilariously all his own.” —Paul Auster on Leaving the Atocha Station

“A character-driven 'page-turner' and a concisely definitive study of the 'actual' versus the 'virtual' as applied to relationships, language, poetry, experience.” —Tao Lin, The Believer on Leaving the Atocha Station

“Ben Lerner's Leaving the Atocha Station is a slightly deranged, philosophically inclined monologue in the Continental tradition running from Büchner's Lenz to Thomas Bernhard and Javier Marías. The adoption of this mode by a young American narrator--solipsistic, overmedicated, feckless yet ambitious--ends up feeling like the most natural thing in the world.” —Benjamin Kunkel, New Statesman's Books of the Year 2011 on Leaving the Atocha Station