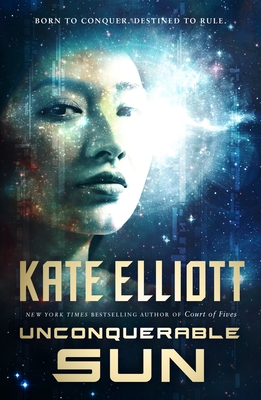 This is book number 1 in the The Sun Chronicles series.

"Non-stop action! Space battles! Intrigue! This is the kind of space opera that I love best—but Elliott does it even better."—New York Times bestselling author Ann Leckie

GENDER-SPUN ALEXANDER THE GREAT ON AN INTERSTELLAR SCALE

Growing up in the shadow of her mother, Eirene, has been no easy task. The legendary queen-marshal did what everyone thought impossible: expel the invaders and build Chaonia into a magnificent republic, one to be respected—and feared.

But the cutthroat ambassador corps and conniving noble houses have never ceased to scheme—and they have plans that need Sun to be removed as heir, or better yet, dead.

To survive, the princess must rely on her wits and companions: her biggest rival, her secret lover, and a dangerous prisoner of war.

Take the brilliance and cunning courage of Princess Leia—add in a dazzling futuristic setting where pop culture and propaganda are one and the same—and hold on tight:

This is the space opera you’ve been waiting for.

Kate Elliott has been writing science fiction and fantasy for 30 years, after bursting onto the scene with Jaran. She is best known for her Crown of Stars epic fantasy series and the New York Times bestselling YA fantasy Court of Fives. Elliott's particular focus is immersive world-building & centering women in epic stories of adventure, amidst transformative cultural change. She lives in Hawaii, where she paddles outrigger canoes & spoils her Schnauzer.

“Non-stop action! Space battles! Intrigue! This is the kind of space opera that I love best--but Elliott does it even better. ”—Ann Leckie, New York Times bestselling author

"Intricate and thrilling, Kate Elliott's Unconquerable Sun reframes history's most legendary conqueror in a brand new galaxy, lights the fuse, and blasts off on an edge-of-your-seat adventure perfect for fans of Arkady Martine and James S.A. Corey." —Emily Skrutskie, author of Bonds of Brass

"Brilliant battles, exciting intrigue, and heroines I would follow through hell--this is the gender-bent space opera of my dreams." —Yoon Ha Lee, multiple-Hugo-winning author of Ninefox Gambit

“A sweeping saga of a fierce and indomitable conqueror and her companions, this is breathtaking and mindblowingly good.”—Aliette de Bodard, Nebula Award-winning author of The Tea Master and the Detective

“Fans of Lois McMaster Bujold and N.K. Jemisin will find this a candidate for instant re-reading as soon as the last page is turned.” —Booklist, starred review

“Absorbing... There should be more SF like this.”—Jo Walton on Jaran

“It’s an absorbing book with great characters that has had a lot of thought put into the universe and which gets the details right. There should be more SF like this.”—Tor.com on Jaran

“The concept got me shivering... the characters, the mysteries, the background history, the cultural complexity, were all so intriguing I couldn't stop reading.”—Elizabeth Moon on Cold Magic