The Demagogue's Playbook: The Battle for American Democracy from the Founders to Trump (Paperback) 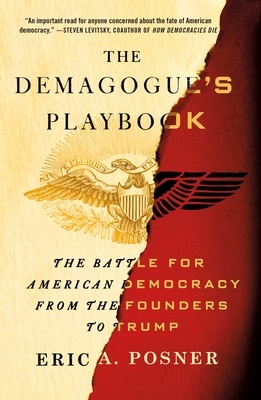 In Stock-Click Title For Store Inventory
Because of how it is sold to us we cannot accept a return of this title.

What Happens to Democracy When a Demagogue Comes to Power?

"It is hard to imagine understanding the Trump presidency and its significance without reading this book.”
—Bob Bauer, Former Chief Counsel to President Barack Obama

What—and who—is a demagogue? How did America’s Founders envision the presidency? What should a constitutional democracy look like—and how can it be fixed when it appears to be broken?

Something is definitely wrong with Donald Trump’s presidency, but what exactly? The extraordinary negative reaction to Trump’s election—by conservative intellectuals, liberals, Democrats, and global leaders alike—goes beyond ordinary partisan and policy disagreements. It reflects genuine fear about the vitality of our constitutional system. The Founders, reaching back to classical precedents, feared that their experiment in mass self-government could produce a demagogue: a charismatic ruler who would gain and hold on to power by manipulating the public rather than by advancing the public good.

President Trump, who has played to the mob and attacked institutions from the judiciary to the press, appears to embody these ideas. How can we move past his rhetoric and maintain faith in our great nation?

In The Demagogue’s Playbook, acclaimed legal scholar Eric A. Posner offers a blueprint for how America can prevent the rise of another demagogue and protect the features of a democracy that help it thrive—and restore national greatness, for one and all.

“Cuts through the hyperbole and hysteria that often distorts assessments of our republic, particularly at this time.” —Alan Taylor, winner of the 2014 Pulitzer Prize for History

ERIC A. POSNER teaches at the University of Chicago. He has written more than one hundred articles on international law, constitutional law, and other topics, and as well as more than ten books, including Radical Markets: Uprooting Capitalism and Democracy for a Just Society and The Twilight of Human Rights Law. He has written opinion pieces for The New York Times, Wall Street Journal, New Republic, Slate, and other popular media. He is a fellow of the American Academy of Arts and Sciences and a member of the American Law Institute.

"Posner takes us through the dangers of the charismatic, amoral, institution-destroying firebrands of American history to help us understand the specific threat that President Trump poses to the republic. His conclusion: Trump’s threat is a dire one."
—Colin Woodard, The Washington Post

"A great virtue of Posner’s conceptual scheme is that it allows him to focus on those aspects of Trump’s presidency that are of lasting significance. Instead of condemning demagogues for any phrase or policy he happens to dislike, he zeros in on their dangerous habit of positing a conflict between the people and the very institutions that have historically enabled them to exert their power...It is difficult to argue with Posner’s conclusion."
—Yascha Mounk, The New York Times Book Review

"The Demagogue’s Playbook is a well-written and -sourced work of pop-scholarship, with a narrative style that moves briskly without skimping on important historical and cultural details."
—The Bulwark

"Read this immensely important book."
—Samantha Power, former US ambassador to the UN and Pulitzer-Prize winning author, on Twitter

"How do we recognize a demagogue when we see one? In this insightful book, Eric Posner shows us that although democracies are inherently vulnerable to demagogues, America has seen remarkably few of them. Until now. The Demagogue’s Playbook makes a compelling case that Donald Trump differs from nearly all other flawed, dishonest, or populist politicians that have passed through American politics. He is a true demagogue—a living manifestation of one our Founders’ greatest fears. This is an important read for anyone concerned about the fate of American democracy."
—Steven Levitsky, Harvard University, and New York Times bestselling co-author of How Democracies Die

"An almost novellike stroll through American history…An insightful analysis into what went wrong with the Founders’ dream."
—Kirkus Reviews

"Professor Posner has made an outstanding, superbly written analysis of how Donald Trump has drawn on the 'demagogue’s playbook' to win a presidency that is severely testing our constitutional democracy. He provides crucial historical perspective on the demagogue as a distinctive and dangerous brand of leader in the American political experience—and on the erosion of the protections that the Founders hoped to have built against a full-fledged demagogue's capture of the White House. It is hard to imagine understanding the Trump presidency and its significance without reading this book.”
—Bob Bauer, Former Chief Counsel to President Barack Obama

“[A] skillful survey of American political history. [Posner] delivers a powerful argument for the need to restore constitutional safeguards against demagoguery.”
—Publishers Weekly

"A brilliant and highly original discussion of one of the most important topics of the current era. Essential reading if you want to understand the world today."
—Cass Sunstein, the Robert Walmsley Professor of Law, Harvard Law School, and co-author of the international bestseller, Nudge: Improving Decisions About Health, Wealth, and Happiness

"In a calm tone and with careful research and keen reasoning, Eric Posner illuminates the interplay of elitism, demagoguery, and populism in American politics, past and present. With a refreshing, sensible clarity, he cuts through the hyperbole and hysteria that often distorts assessments of our republic, particularly at this time."
—Alan Taylor, Pulitzer Prize winning historian of William Cooper’s Town: Power and Persuasion on the Frontier of the Early Republic and The Internal Enemy: Slavery and War in Virginia 1772–1832

"Moving through a series of political and historical events and personalities, including Andrew Jackson, Huey Long, Joseph McCarthy and Donald Trump, Posner illuminates the characteristics that make someone a “demagogue,” including vicious personal attacks on political opponents, divisive accusations against vulnerable groups, the intentional spreading of lies, and efforts to undermine such fundamental institutions as the press and the judiciary. This work is necessary reading for anyone who wants to understand the challenges we, as a nation, face in the era of Trump."
—Geoffrey R. Stone, Edward H. Levi Distinguished Professor of Law, The University of Chicago, and author of Perilous Times,winner of the Los Angeles Times Book Prize

“A magnificent book that traces the concepts of populism and demagoguery throughout American history. The book is hopeful in that the country has survived other demagogues and frightening in reminding us of how such a man can come to power.”
—Erwin Chemerinsky, Dean and Jesse H. Choper Distinguished Professor of Law, University of California, Berkeley School of Law, and bestselling author of We the People: A Progressive Reading of the Constitution for the 21st Century

"Eric Posner is an incisive guide and a wise advisor as he leads us through the history and conditions that gave rise to two disruptive American demagogues, Andrew Jackson and the more dangerous Donald Trump. He takes us on this journey so that we may understand, with clear eyes, what we have done, and to recognize the scale of the attack we face against our own democratic institutions."
—Tom Nichols, author of The Death of Expertise

"A fascinating political history...by reading Posner's survey, readers will see more clearly and starkly the historical context of Trump's rise to political power and how he appeals and holds on to his base."
—Booklist