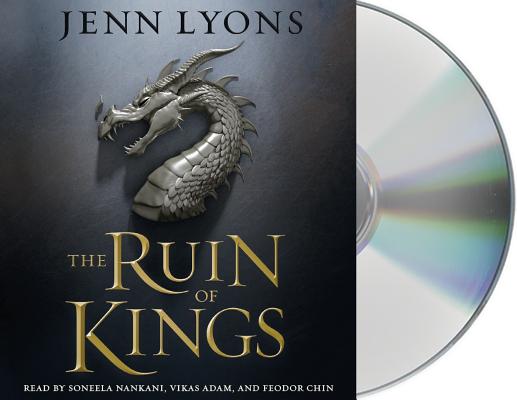 By Jenn Lyons, Feodor Chin (Read by), Soneela Nankani (Read by), Vikas Adam (Read by)
$79.99
It's Complicated--Contact Us for More Information

This is book number 1 in the A Chorus of Dragons series.

Jenn Lyons begins the Chorus of Dragons series with The Ruin of Kings, an epic fantasy audiobook about a man who discovers his fate is tied to the future of an empire.

When destiny calls, there's no fighting back.

Kihrin grew up in the slums of Quur, a thief and a minstrel's son raised on tales of long-lost princes and magnificent quests. When he is claimed against his will as the missing son of a treasonous prince, Kihrin finds himself at the mercy of his new family's ruthless power plays and political ambitions.

Practically a prisoner, Kihrin discovers that being a long-lost prince is nothing like what the storybooks promised. The storybooks have lied about a lot of other things, too: dragons, demons, gods, prophecies, and how the hero always wins.

Then again, maybe he isn't the hero after all. For Kihrin is not destined to save the world.

He's destined to destroy it.

"A trio of talented narrators tackles the first book in a new fantasy series centered on a man who is destined to destroy an empire...the trio complement each other and elevate an unconventional story filled with intense world-building and vivid characters." —AudioFile Magazine

"The Ruin of Kings revs up with the glitz of a high-speed, multi-level video game, with extreme magic and a teen hero with angst."—Janny Wurts, author of The Curse of the Mistwraith