The Green New Deal: Why the Fossil Fuel Civilization Will Collapse by 2028, and the Bold Economic Plan to Save Life on Earth (Paperback) 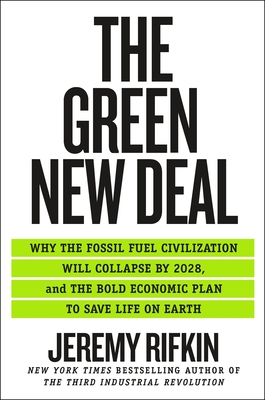 A new vision for America’s future is quickly gaining momentum. Facing a global emergency, a younger generation is spearheading a national conversation around a Green New Deal and setting the agenda for a bold political movement with the potential to revolutionize society. Millennials, the largest voting bloc in the country, are now leading on the issue of climate change.

While the Green New Deal has become a lightning rod in the political sphere, there is a parallel movement emerging within the business community that will shake the very foundation of the global economy in coming years. Key sectors of the economy are fast-decoupling from fossil fuels in favor of ever cheaper solar and wind energies and the new business opportunities and employment that accompany them. New studies are sounding the alarm that trillions of dollars in stranded fossil fuel assets could create a carbon bubble likely to burst by 2028, causing the collapse of the fossil fuel civilization. The marketplace is speaking, and governments will need to adapt if they are to survive and prosper.

In The Green New Deal, New York Times bestselling author and renowned economic theorist Jeremy Rifkin delivers the political narrative and economic plan for the Green New Deal that we need at this critical moment in history. The concurrence of a stranded fossil fuel assets bubble and a green political vision opens up the possibility of a massive shift to a post-carbon ecological era, in time to prevent a temperature rise that will tip us over the edge into runaway climate change. With twenty-five years of experience implementing Green New Deal–style transitions for both the European Union and the People’s Republic of China, Rifkin offers his vision for how to transform the global economy and save life on Earth.

Jeremy Rifkin is president of the Foundation on Economic Trends and the author of more than fifteen bestselling books, including The Hydrogen Economy and The End of Work. He has been a guest on Face the Nation, The Lehrer News Hour, 20/20, Larry King Live, Today, and Good Morning America. The National Journal named Rifkin as one of 150 people in the U.S. that have the most influence in shaping federal government policy. He has also testified before numerous congressional committees, and since 1994, Mr. Rifkin has been a senior lecturer at the Wharton School’s Executive Education Program at the University of Pennsylvania.

Rifkin is chairman of the Global CEO Business Roundtable, which includes IBM, Cisco, Cushman and Wakefield, and has served as an adviser to various global leaders, including Nicolas Sarkozy of France and Angela Merkel of Germany. His monthly column on global issues appears in many of the world’s leading newspapers and magazines, including The Los Angeles Times, The Guardian in the U.K., Die Süddeutsche Zeitung in Germany, Trud in Bulgaria, Clarín in Argentina, and Al-Ittihad in the U.A.E. He lives in Bethesda, MD.