On a Dark Night I Left My Silent House: A Novel (Paperback) 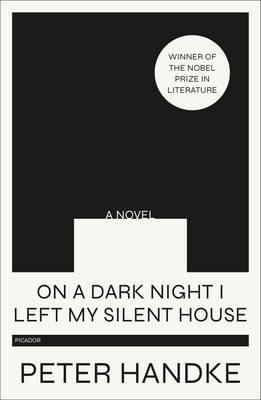 A short, powerful new novel by one of the greatest writers in the German language.

On a Dark Night I Left My Silent House is Nobel Prize-winning author Peter Handke's evocative, moving, often fantastic, novel about one man's conflict with himself and his journey toward resolution.

During one night shift, an unnamed, middle-aged pharmacist in Taxham, an isolated suburb of Salzburg, tells his story to a narrator. The pharmacist is known and well-respected, but lonely and estranged from his wife. He feels most comfortable wandering about in nature, collecting and eating hallucinogenic mushrooms.

One day he receives a blow to the head that leaves him unable to speak, and the narrative is transformed from ironic description into a collection of sensual impressions, observations and reflections. The pharmacist, who is now called the driver, sets out on a quest, travelling into the Alps with two companions--a former Olympic skiing champion and a formerly famous poet--where he is beaten and later stalked by a woman. He drives through a tunnel and has a premonition of death, then finds himself in a surreal, foreign land. In a final series of bizarre, cathartic events, the driver regains his speech and is taken back to his pharmacy--back to his former life, but forever changed.

A powerful, poetic exploration of language, longing and dislocation in the human experience, On a Dark Night I Left My Silent House reveals Handke at his magical best.

Peter Handke was born in Griffen, Austria, in 1942. His many novels include The Goalie’s Anxiety at the Penalty Kick, A Sorrow Beyond Dreams, My Year in the No-Man’s Bay, and Crossing the Sierra de Gredos, all published by FSG. Handke’s dramatic works include Kaspar and the screenplay for Wim Wenders’s Wings of Desire. Handke is the recipient of many major literary awards, including the Georg Büchner, Franz Kafka, and Thomas Mann Prizes and the International Ibsen Award. In 2019, he was awarded the Nobel Prize in Literature “for an influential work that with linguistic ingenuity has explored the periphery and the specificity of human experience.”

Krishna Winston is the Marcus L. Taft Professor of German Language and Literature at Wesleyan University. She has translated more than thirty books, including five previous works by Peter Handke and works by Werner Herzog, Günter Grass, Christoph Hein, and Goethe.