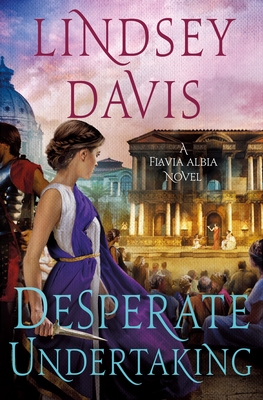 This is book number 10 in the Flavia Albia Series series.

In Lindsey Davis's next book in the beloved Flavia Albia Series, Desperate Undertaking, a mad killer (or killers!) is strewing bodies around in the most gruesome of manners and, true to form, it is up to Flavia Albia to determine what is really going on and stop this bacchanal of death.

In the first century, under Domitian's reign, strange and brutal goings on are nothing new in Rome. Flavia Albia, daughter of Marcus Didius Falco, has taken over her father's business as a private informer but she tries to shy away from the brutal, the complicated, and the political - because nothing good comes of any of them. Unfortunately, she's not very good at turning them down.

Lindsey Davis was born and raised in Birmingham, England. After taking an English degree at Oxford and working for the civil service for thirteen years, she “ran away to be a writer.” Her internationally bestselling novels featuring ancient Roman detective Marcus Didius Falco include Venus in Copper, The Iron Hand of Mars, Nemesis and Alexandria. She is also the author of Rebels and Traitors, set during the English Civil War. Davis is the recipient of the Crime Writers’ Association Cartier Diamond Dagger Award, the highest accolade for crime writers, as well as the Ellis Peters Historical Dagger Award and the Authors' Club Best First Novel award.