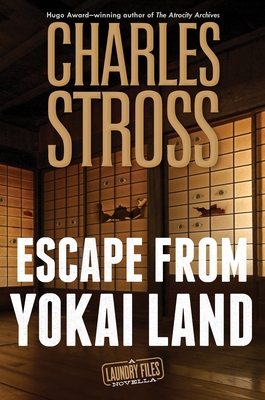 This is book number 12 in the Laundry Files series.

Regular readers of Charles Stross's Laundry Files might have noticed Bob Howard's absence from the events of The Nightmare Stacks, and his subsequent return from Tokyo at the start of The Delirium Brief.

Escape from Yokai Land explains what he was doing there.

But then Bob's simple trip turns into a deadly confrontation with the ultimate yokai. It's massively powerful. It's pink. And it says "Hello."

CHARLES STROSS (he/him) is a full-time science fiction writer and resident of Edinburgh, Scotland. He has won three Hugo Awards for Best Novella, including for the Laundry Files tale “Equoid.” His work has been translated into over twelve languages. His novels include the bestselling Merchant Princes series, the Laundry series (including Locus Award finalist The Dilirium Brief), and several stand-alones including Glasshouse, Accelerando, and Saturn's Children.

Like many writers, Stross has had a variety of careers, occupations, and job-shaped catastrophes, from pharmacist (he quit after the second police stakeout) to first code monkey on the team of a successful dot-com startup (with brilliant timing, he tried to change employers just as the bubble burst) to technical writer and prolific journalist covering the IT industry. Along the way he collected degrees in pharmacy and computer science, making him the world’s first officially qualified cyberpunk writer.