Landslide: The Final Days of the Trump Presidency (CD-Audio) 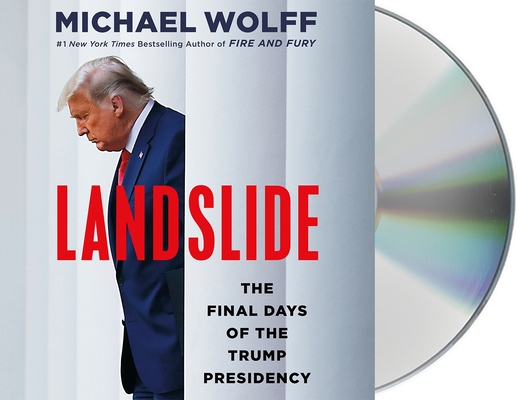 By Michael Wolff, Holter Graham (Read by)
$39.99
It's Complicated--Contact Us for More Information

This program includes an introduction read by Michael Wolff, as well as archival recordings of speeches made by Rudy Giuliani, Sidney Powell, and Donald Trump.

Critics agree: Michael Wolff’s Landslide is THE audiobook on Trump.

“I inhaled Landslide, gobbled it up.” —Slate

We all witnessed some of the most shocking and confounding political events of our lifetime: the careening last stage of Donald J. Trump’s reelection campaign, the president’s audacious election challenge, the harrowing mayhem of January 6, the buffoonery of the second impeachment trial. But what was really going on in the inner sanctum of the White House during these calamitous events? What did the president and his dwindling cadre of loyalists actually believe? And what were they planning?

Michael Wolff pulled back the curtain on the Trump presidency with his #1 bestselling blockbuster Fire and Fury. Now, in Landslide, he closes the door on the presidency with a final, astonishingly candid account.

Wolff embedded himself in the White House in 2017 and gave us a vivid picture of the chaos that had descended on Washington. Almost four years later, Wolff finds the Oval Office even more chaotic and bizarre, a kind of Star Wars bar scene. At all times of the day, Trump, behind the Resolute desk, is surrounded by schemers and unqualified sycophants who spoon-feed him the “alternative facts” he hungers to hear—about COVID-19, Black Lives Matter protests, and, most of all, his chance of winning reelection. Once again, Wolff has gotten top-level access and takes us front row as Trump’s circle of plotters whittles down to the most enabling and the president reaches beyond the bounds of democracy as he entertains the idea of martial law and balks at calling off the insurrectionist mob that threatens the institution of democracy itself.

As the Trump presidency’s hold over the country spiraled out of control, an untold and human account of desperation, duplicity, and delusion was unfolding within the West Wing. Landslide is that story as only Michael Wolff can tell it.

A Macmillan Audio production from Henry Holt and Company

Michael Wolff is the author of several books about the Trump White House: Fire and Fury, Siege, and Landslide. His other books include a biography of Rupert Murdoch, The Man Who Owns the News, and his memoir of the early internet years, Burn Rate. He has been a regular columnist for New York magazine, Vanity Fair, British GQ, the Hollywood Reporter, and the Guardian. The winner of two National Magazine Awards, he lives in New York City with his family.

His film credits include Fly Away Home, Maximum Overdrive, Hairspray, and The Diversion, a short film which he acted in and produced. On television, he has appeared in Army Wives, Damages, As The World Turns, Rescue Me, Law & Order and New York Undercover. He received a B.A. from Skidmore College and an M.F.A. from Vermont College.