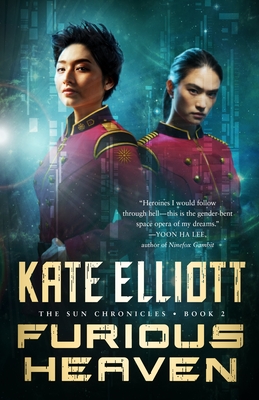 This is book number 2 in the The Sun Chronicles series.

The Republic of Chaonia fleets, under the joint command of Princess Sun and her formidable mother, Queen-Marshal Eirene, have defeated and driven out an invading fleet of the Phene Empire, though not without heavy losses. But the Empire remains undeterred. While Chaonia scrambles to rebuild its military, the Empire’s rulers are determined to squash Chaonia once and for all. They believe their military might is strong enough to defeat the enemy, but they also secure a secret alliance with a deadly religious sect skilled in the use of assassination and covert ops, to destabilize the republic.

On the eve of Eirene’s bold attack on the rich and populous Karnos System, an unexpected tragedy strikes the republic. Sun must take charge or lose the throne. Will Sun be content with the pragmatic path laid out by her mother for Chaonia’s future? Or will she choose to forge her own legend? Can she succeed despite all the forces arrayed against her?

Kate Elliott has been writing science fiction and fantasy for 30 years, after bursting onto the scene with Jaran. She is best known for her Crown of Stars epic fantasy series and the New York Times bestselling YA fantasy Court of Fives. Elliott's particular focus is immersive world-building & centering women in epic stories of adventure, amidst transformative cultural change. She lives in Hawaii, where she paddles outrigger canoes & spoils her Schnauzer.

“Non-stop action! Space battles! Intrigue! This is the kind of space opera that I love best--but Elliott does it even better.” —Ann Leckie, New York Times bestselling author

“Intricate and thrilling, Kate Elliott's Unconquerable Sun reframes history's most legendary conqueror in a brand new galaxy, lights the fuse, and blasts off on an edge-of-your-seat adventure perfect for fans of Arkady Martine and James S.A. Corey.” —Emily Skrutskie, author of Bonds of Brass

“Brilliant battles, exciting intrigue, and heroines I would follow through hell--this is the gender-bent space opera of my dreams.” —Yoon Ha Lee, Hugo Award-winning author of Ninefox Gambit

“Fans of Lois McMaster Bujold and N. K. Jemisin will find this a candidate for instant re-reading as soon as the last page is turned.” —Booklist, starred review