I Am Not Alone (Hardcover) 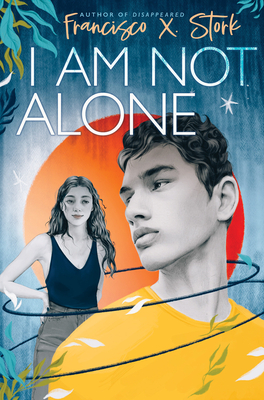 Award-winning author Francisco X. Stork revisits some of the themes and ideas that made Marcelo in the Real World such an unforgettable novel.

Alberto’s life isn't easy: He's an undocumented immigrant from Mexico who lives with his sister's abusive boyfriend—but he'd always accepted his place in the world. Until he starts hearing the voice of a man called Captain America, a voice that wants him to achieve more, no matter the cost.

Grace has it all: She has a supportive boyfriend, she’s on track to be valedictorian, and she’s sure to go to the college of her dreams. Still, nothing feels right to her any more after the divorce of her parents, and feels she needs something more.

When Alberto and Grace meet, they have an immediate and electric connection. But when Alberto is present at the scene of a terrible crime, he becomes a suspect. And with his developing schizophrenia, he’s not even sure he believes in his own innocence.

Can Grace find a way to prove Alberto’s innocence to himself and the world?

This is a page-turning thriller and a sensitive story about mental health, love, and community that will appeal to anyone who has struggled with their place in the world, from award-winning author Francisco X. Stork.

Francisco X. Stork is the author of Marcelo in the Real World, winner of the Schneider Family Book Award for Teens and the Once Upon a World Award; The Last Summer of the Death Warriors, which was named to the YALSA Best Fiction for Teens list and won the Amelia Elizabeth Walden Award; Irises; The Memory of Light, which received four starred reviews; and Disappeared, which also received four starred reviews and was named a Kirkus Best Book of the Year. He lives near Boston with his wife. You can find him on the web at franciscostork.com and @StorkFrancisco.

Praise for On the Hook:

* "What starts as a quiet drama quickly escalates to a potent, fiery story while remaining a deep meditation about cycles of violence. A staggering and fearless book." — Kirkus Reviews, starred review

* "Intense, at times brutal, but so vital for today's polarized society, this book will hopefully encourage readers to have compassion for others, even those with whom they vehemently disagree." — Booklist, starred review

* "Unflinching... Hector must decide whether his need for revenge outweighs his desire to heal." — Publishers Weekly, starred review

"With honesty and authenticity, Illegal grapples with questions that we all ask ourselves about the moral inequities of immigration. Heartbreaking, yet hopeful." — Pam Muñoz Ryan, New York Times bestselling author of Echo and Esperanza Rising

"Illegal is timely and evocative. Once again, Francisco X. Stork challenges and expands our perceptions of empathy, justice, and what it means to be human." — Sharon Cameron, New York Times bestselling author of The Light in Hidden Places

* "A tense thriller elevated by Stork's nuanced writing and empathy for every character, including the villains—superb." — Kirkus Reviews, starred review

Praise for The Memory of Light:

Praise for Marcelo in the Real World:

* "Stork introduces ethical dilemmas, the possibility of love, and other 'real world' conflicts, all the while preserving the integrity of his characterizations and intensifying the novel's psychological and emotional stakes. Not to be missed." — Publishers Weekly, starred review