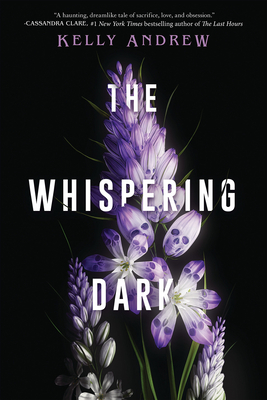 Continuing the theme of reading creepy literature in winter time, this one is a promising Young Adult tale that follows a deaf student who's accepted into a prestigious academy that teaches students how to travel between parallel worlds. Ghostly partnerships, tales of sacrifice, love, and obsession, this is a story that you can't go wrong with.

— From The Whispering Dark

Delaney Meyers-Petrov is tired of being seen as fragile just because she's Deaf. So when she's accepted into a prestigious program at Godbole University that trains students to slip between parallel worlds, she's excited for the chance to prove herself. But her semester gets off to a rocky start as she faces professors who won't accommodate her disability, and a pretentious upperclassman fascinated by Delaney's unusual talents.

Colton Price died when he was nine years old. Quite impossibly, he woke several weeks later at the feet of a green-eyed little girl. Now, twelve years later, Delaney Meyers-Petrov has stumbled back into his orbit, but Colton's been ordered to keep far away from the new girl... and the voices she hears calling to her from the shadows.

Delaney wants to keep her distance from Colton -- she seems to be the only person on campus who finds him more arrogant than charming -- yet after a Godbole student turns up dead, she and Colton are forced to form a tenuous alliance, plummeting down a rabbit-hole of deeply buried university secrets. But Delaney and Colton discover the cost of opening the doors between worlds when they find themselves up against something old and nameless, an enemy they need to destroy before it tears them -- and their forbidden partnership -- apart.

Kelly Andrew lost her hearing when she was four years old. She's been telling stories ever since. Kelly lives in New England with her husband, two daughters, and a persnickety Boston Terrier.

Praise for The Whispering Dark:

"A paranormal thriller laced with twists and revelations that will stop your heart and make your blood run cold." -- Aiden Thomas, New York Times bestselling author of Cemetery Boys

"The Whispering Dark will burrow into your bones and nestle deep, refusing to let go. Kelly Andrew's prose is aching and lyrical, the mark of a master in the making. This is a story I won't soon forget." -- Hafsah Faizal, New York Times bestselling author of We Hunt The Flame and We Free the Stars